There are few sounds more romantic than a train whistle as it pulls out of the station starting off on a journey. Unless, of course, you’re riding the Rail Runner Express. This unusual 96-mile- long railroad runs between Albuquerque and Santa Fe, NM. The trains are sleek looking silver diesel engines with comfortable double-decker cars and a bright red roadrunner (New Mexico’s state bird) painted on the side. Much like the roadrunner in the old Looney Tune cartoons, the train makes the same distinctive sound. Just as the engine leaves the station, it goes: “Beep beep.”

It’s just one of several funny things about this 10-year-old railway that has transformed the way to get to Santa Fe. Although it’s often confused with AMTRAK, the Rail Runner is its own separate railroad, and only goes from Belen (a few miles south of Albuquerque) to the Railyard Plaza in Santa Fe, just a few minutes stroll from the historic downtown plaza. It was built in 2006 primarily as a commuter railroad to move people around northern New Mexico and to transport workers who couldn’t afford to live in ritzy Santa Fe from the suburbs to downtown.

But the train has also made Santa Fe a superb car-free, weekend destination. Although Santa Fe’s airport is small with limited flights, Albuquerque’s International Sunport is served by eight major airlines with 5 million passengers a year. If you pre-buy a Rail Runner Express ticket online (only $9 for adults, $4.50 for seniors), there is a free shuttle from the Sunport airport that will take you directly to the railroad station in downtown Albuquerque. Here you can hop the train, and in 90 minutes (traveling at speeds up to 79 miles an hour) be within walking distance of most of Santa Fe’s beautiful sights. But leave your camera in its case during the rail journey. Although the scenery is beautiful, conductors and PA announcements will explain that since the railroad passes through the Sandia and Kewa Pueblos, riders are asked to not take any photos.

Once in Santa Fe, you can wheel your luggage to dozens of nearby downtown hotels, or hop the Santa Fe Pickup, a free shuttle bus with a bright red pickup truck painted on the side that meets every train and stops at major attractions in town, from the galleries on Canyon Road to Museum Hill, with buses coming every 15 minutes or so. There is absolutely no reason to hassle with your own car in Santa Fe, paying $18 a night parking, while trying to negotiate the maze of twisting 400-year-old roads. All of the city’s charms are walkable. And it’s also a historic delight to arrive in town by rail since the railroads played such an important role in Santa Fe’s style and development.

The perfect hotel to roll to from a train is La Fonda, the grandest of Santa Fe’s old historic hotels. There has been an inn of some sort on this corner of the Santa Fe Plaza since 1607. The current La Fonda (Spanish for “the inn”) was designed in 1922 by architect Isaac Hamilton Rapp, called the “creator of Santa Fe style.” Rapp blended the adobe square architecture of the indigenous Pueblo Indians with a romanticized view of Spanish colonial design, creating a fanciful combination of an earth-colored adobe building with verandas, hand-carved wood beams, and cathedral ceilings, decorated with brilliant Navajo rugs and pottery. When the Atchison, Topeka & Santa Fe Railroad (AT&SF) acquired the hotel in 1925, they brought in influential Southwest architects Mary Elizabeth Jane Colter and John Gaw Meem, who expanded on “Santa Fe style” with larger windows, individually painted furniture, stained glass skylights, terracotta tile floors, wrought iron bannisters and hammered tin chandeliers – all of which can still be seen in the hotel today. It was Meem who helped write the 1957 city ordinance that makes Santa Fe “the city different.”

The ordinance, still in effect, says that no building in the historic district can be taller than the Basilica (five stories) and all new buildings have to be built in the Spanish Pueblo Revival or Territorial Revival style – in other words, Santa Fe style. Because of this, Santa Fe was the first city in the U.S. to be declared a UNESCO city of Folk Arts, Crafts and Design, joining Seville, Edinburgh, Buenos Aires and others.

But the La Fonda has more history to offer than its architecture, thanks to the work of a former New York dishwasher and pot scrubber named Fred Harvey. Harvey emigrated to the U.S. from England in 1853 and learned the food business from the bottom up. At this time, railroads didn’t serve food on cars. Instead, they stopped the train at a roadhouse where a combination of rancid beef, cold beans and day-old coffee was dished out quickly so the train could be on its way.

To combat this, Harvey invented the idea of the chain restaurant. Working with the AT&SF railroad, he built a series of first-class restaurants and gift shops near the tracks where railroad passengers could always count on a consistent experience of top quality food and service. A distinctive feature of these “Harvey House” restaurants was the wait staff. Harvey ran ads all over eastern newspapers recruiting “white, young women, 18-30 years of age, of good character, attractive and intelligent.” The girls had to be single and sign a contract that they would remain unmarried for one year, or forfeit part of their salary. They could be assigned to work at any of the 84 Harvey Houses in the West, and had a 10 p.m. curfew every night. Most distinctive of all, their uniform was a starched black dress with a white apron that hid their figure.

At a time where there were limited opportunities for woman, this was quite an adventure – the forerunner of being a flight attendant – and more than 100,000 women eventually worked as Harvey Girls, doing as much as anyone to help tame the “Wild West.” La Fonda was a Harvey House from 1926 to 1969.

You can see photos of the Harvey Girls and learn more about their individual stories at the nearby New Mexico History Museum, a brilliantly done hodgepodge of artifacts collected from New Mexico’s many heroes and villains. From Billy the Kid’s spurs to Kid Carson’s tobacco pouch to novelist D.H. Lawrence’s satchel, the museum tells Santa Fe’s amazing 400-year history in a fun continuum, from its days as the principal northern city in Mexico through the lively period of the Old West and the Santa Fe Trail, to its invasion by hippies in the ‘60’s to its emergence today as the third largest art market in the nation with more than 250 art galleries in a two square mile area.

Attached to the museum, is the Palace of the Governors, the oldest continually occupied public building in America — and a one-time battlefield! During the Pueblo Revolt of 1680, the native Pueblo Indians rose up and killed 400 Spanish settlers. Those Spanish remaining, barricaded themselves in the Palace for a siege, before finally sneaking out and retreating to El Paso. For the next 12 years, the Palace was under the control of the Pueblo Indians. Finally in 1692, a Spanish army returned and with the threat of seven cannons, retook the Palace.

Many of the rooms have been restored to the period when this was the capital for Nuevo Mexico, a huge area that included Texas, Arizona, Utah, California, Nevada and Colorado. Other rooms tell the story of the building in the 1846 War with Mexico, the Civil War, and the role of the building today, where the outdoor veranda serves as a daily trading post for Native American artists to sell their work. The program is regulated by the state to allow only 69 Native American artists a day, many of whom come early on cold mornings to get their space. The artists can change daily, but the jewelry, pottery and art is guaranteed to be authentic Native American work – something not true of many of the gift shops in town.

Another artist who worked in the Palace was its U.S. Governor, Lew Wallace, a former Civil War General appointed to govern the New Mexico territory before it was a state. Wallace lived in the Palace and at night, wrote his famous novel “Ben Hur” in these rooms – the first of many important writers and artists to call Santa Fe home.

Another, artist Georgia O’Keeffe was attracted here because of Santa Fe’s 325 days of sunshine and the soft, dry desert light. There is a museum devoted to her life and art down the block. Several of her paintings can also be viewed in the majestic New Mexico Museum of Art, another classic Santa Fe style building designed by Isaac Rupp in 1917. A $25 CulturePass will get you in the history and art museums, as well as the Museum of Indian Arts and Culture and Museum of International Folk Art, both on Museum Hill and easily accessible by the free Santa Fe Pickup. Altogether, there are 17 museums in Santa Fe…enough to keep anyone busy.

But the real fun of Santa Fe on a pedestrian weekend is just wandering around the neighborhoods and shops. Every street in Santa Fe is a work of art. Every gateway beckons, every garden is gorgeous, every blue door or shutter is a photo. The old roads don’t follow a grid pattern, and part of the fun is getting lost and discovering new homes, churches and businesses on the back streets. Canyon Road (ten minutes from La Fonda) was the original road to Mexico, and most of the old adobe homes along a two-mile stretch have been converted to art galleries. While the art might seem to be beyond your price range, don’t be intimidated. Duck in the galleries, talk to the artists, and you might be surprised at how affordable some of it is. 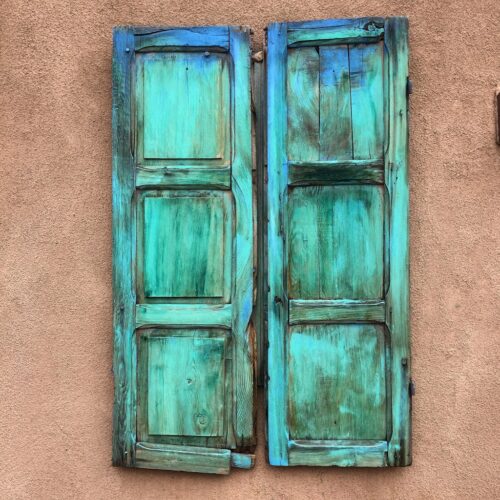 Don’t be surprised if you see locals like Jane Fonda, Robert Redford, Game of Thrones author George Martin, Julia Roberts and Gene Hackman also walking along. Certainly, Santa Fe is ground zero for serious Southwest shopping with an incredible number of Native American jewelry boutiques intermingled with 400 restaurants, many serving New Mexican cuisine with tasty green chile from nearby Hatch, NM – arguably the best in the world. Eat as much as you like, but don’t forget you have to wheel and carry everything you buy back to the Rail Runner!

IF YOU GO: www.santafe.org The La Fonda hotel offers historic walking tours at 10 a.m. for $14.