Rolling and Drinking Beer on the Ski Train

Every Winter weekend for the past 69 years, the Ski Train has chugged out of Denver’s Union Station at 7:15 a.m., climbing 56 miles up into the Rocky Mountains on what many people call the most scenic stretch of railroad track in the nation. Along the way, the train burrows through 28 tunnels, hugging a narrow rock canyon wall as it zigzags up 4,000 feet in elevation to arrive at the Moffat Tunnel — the 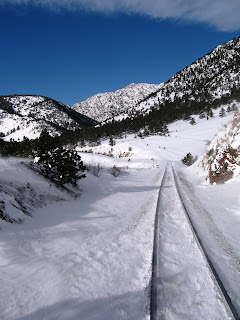 Here, the train passes underneath the Continental Divide, and emerges right at the base of Winter Park, the third largest ski area in Colorado. It’s a great way for skiers to get to the slopes without the hassle of driving, but the train journey is so scenic, half the train passengers don’t ski. They just come up for the scenery and to hang out in the 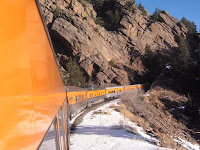 town of Winter Park, take a heated snowcat ride to the top of the mountain, go sledding and tubing in nearby Fraser, bundle up on a horse-drawn sleigh ride through forests of pine trees, or just sit in the sun at an outdoor bar like the Derailer, waiting for the train whistle at 4:15 p.m. that signals it’s time to start on the journey back down the mountain.

Only now, on the return trip, two of the 14 cars on this quarter-mile long yellow-orange train become lounge cars – the longest rolling bar in the nation. After a day of skiing o 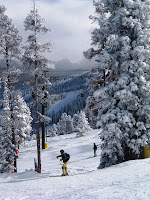 r sledding, it’s incredibly relaxing to have a beer or wine on a train, while winter scenery flies by the window. And it’s pretty great scenery too. The train curls down S 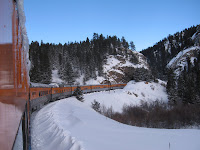 outh Boulder Canyon through a part of Colorado where there are no paved roads or highways – there’s nothing here but rocks and trees, an ice-crusted river and the railroad tracks.
Winter Park Resort gets more snow annually than any other major Colorado ski area — 350 inches…and consistently wins as the favorite ski resort of Coloradans. It gets my vote. There are three interconnected mountains and 143 trails, so it can get confusing and I’ve been lost many times…especially trying to get back from Mary Jane to Winter Park.
But the scenery’s spectacular on top at 12,060 feet with a 360-degree panorama that takes in most of the state. The runs are long (up to 4.5 miles) and there are 25 lifts so lines are never too bad (especially when tired old legs need the rest anyway). The Sunspot restaurant also gets my vote as one of the best on mountain cafes with an outdoor deck that is two miles high and a big stone fireplace and wood beam ceilings.

But a word about life two miles above sea level. 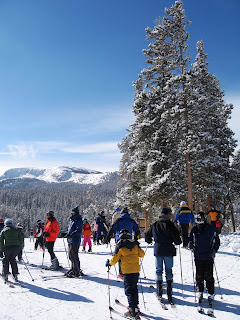 For one thing, the sky really is bluer due to less pollution and water vapor in the upper atmosphere. Baseballs, golf balls and footballs travel 9 percent farther. Special high altitude tennis balls have to be made for Denver’s mile high altitude using toned-down rubber and less pressure and basketballs are inflated with 7-10 pounds less air than at sea level.

Strangely enough, winters feel much warmer in Colorado because high altitude means there are fewer air molecules pressing against your skin. Also, the low humidity produces a “dry cold” that most people find less penetrating than a “wet cold” at sea level. Outdoor cafes are open all winter, and picnic tables are always filled with people eating outdoors. But remember, there is only half the protection from the sun’s rays that can be found at sea level, so sunscreen and sunglasses are a must. 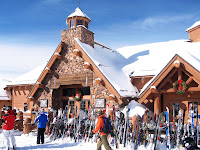 In Denver, water boils at 202 degrees instead of 212 degrees, and it takes four minutes to soft boil a three-minute egg. High altitude is excellent for beer, causing it to have more fizz and carbonation. However, be careful opening champagne bottles. Most of them are bottled at sea level and the change in pressure in Colorado’s light air causes the cork to fly out much quicker. 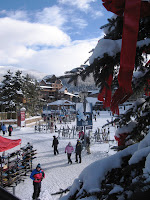 In fact, be careful drinking any alcohol at really high altitude. Since there is less oxygen in the air, your lungs have to work harder to pump oxygen into the blood, meaning alcohol is absorbed into the blood system quicker, speeding up the effect that a couple of drinks would normally have. The bottom line — two beers at the Sunspot and it can be a long trip back down the mountain.

I wait until I’m done for the day, have one at the outdoor deck overlooking 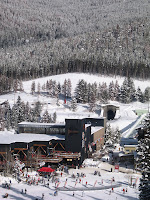 the slopes at the Derailer Bar, then hop on the train back to Union Station…which just happens to be across the street from Denver’s Wynkoop Brewing Company – the largest and best brew pub in Colorado.

IF YOU GO: The train leaves from Union Station at 7:15a.m. every Saturday and Sunday from Dec.-March 29, with trips on Thurs. and Fri. starting in Feb. The trip takes about two hours each way with the return train leaving Winter Park at 4:15p.m., arriving back at Union Station at about 6:30 p.m., although coal trains have priority on the line and can delay the trip home. Summer schedule includes runs in July and August. For schedule and prices, visit: http://www.skitrain.com/ .

Drinking with George Washington in Philadelphia Walking and Drinking Beer with the Wreckers, Rebels and Rumrunners of Key West