“When I first came here, almost 30 years ago, Vallarta was a fishing village of some 2000 souls. There was one road to the outside world – and it was impassable during the rainy season.”

So wrote American film director John Huston about his first encounter with the sleepy, isolated fishing village he was destined to change into an international mega resort.

In 1962, Huston was one of the world’s top film directors. He had hit upon a formula that worked perfectly. In films like The African Queen and The Treasure of Sierra Madre, he placed famous stars in beautiful and remote settings and let the location become a central part of the story.

Now, in 1962, charged with creating the film version of Tennessee Williams’ hit play, Night of the Iguana, he selected as his setting Mismaloya, a curving arc of a beach on the Bay of Banduras, just south of the remote village of Puerto Vallarta.

And then the chaos began.

Mismaloya had no electricity, no running water, and no roads. The film crew, equipment and actors had to come to the location every day by boat.

And what a crew it was. Richard Burton and Elizabeth Taylor were the two most popular and highly paid actors in the world. Both of them were married, but not to each other.

Burton was starring in the film with three equally glamourous actresses, Ava Gardner, Deborah Kerr and Sue Lyon. Liz was along just to be close to Burton.

For her 32nd birthday, Burton bought Liz a gorgeous home in the hills above Puerto Vallarta – then bought himself the house next door, building a bridge between the two. The press went nuts.

When the publicists and photographers weren’t busy chasing Dick and Liz, they spent their time glorifying the incredible beauty of the location. Puerto Vallarta was portrayed as paradise – a tiny village at the edge of jungle mountains with whitewashed buildings clinging to the hills, covered with pink bougainvillea and topped with red tile roofs.

Small wonder that with the encouragement of the Mexican government and local tourism officials, Puerto Vallarta became the “accidental” resort, mushrooming from a village with no roads that was only accessible by air or sea, into today’s city of a quarter million people with a cruise ship dock, spas, five star restaurants and resorts, exquisite art galleries and a huge assortment of adventure travel activities ranging from zip-lining to swimming with dolphins.

But strangely, with all the growth, it is still easy to find the romantic, isolated village of Dick and Liz. Here’s a few places:

The quiet cobblestone backstreets of Vallarta’s historic downtown (dubbed the Romantic Zone) still feel like a village with flowers, terraces, gorgeous white villas, red tiled roofs, and views of the Pacific in every direction.

The Lady of Guadalupe Church (the symbol of the city) rings its bell on the quarter hour adding a romantic touch.

Two reasons the area hasn’t changed much – the streets are incredibly steep and walking on cobblestones can be painfully difficult. If you’re up for it, you can climb 222 steps to the top cross high above the city for a sweeping view of the bay.

Or better, take a two-hour walking tour with Sandra Cesca of Walk Vallarta!

On a variety of $30 tours you can see the colonial architecture of Gringo Gulch, visit shops and markets to watch artisans at work, sample local chocolate, cigars and coffee, meet some residents and hear wild tales about Dick and Liz, and their friends and fellow hell raisers who they entertained in Vallarta like Peter O’Toole, Richard Harris and Oliver Reed.

The romantic Hotel Catedral near the swinging bridges over the Cuale River is a wonderful place to stay.

Drink Cerveza in a Palapa in Yelapa

Until a few years ago, Yelapa had no outside electricity or roads and even today, most visitors arrive by boat. Getting there is an adventure. Hop a bus and travel along the rugged, cliff-lined coast six miles south to Boca de Tomatlan. This is the “end of the line,” the southernmost town on Bahia de Banderas (the 7th largest bay in the world). From here, the paved road turns away from the sea and heads into the mountains. To the west there is 50 miles of coast that is only accessible by water.

Boca feels like the “end of the line.” Jungle palm trees come to the edge of the bay, and the only sounds at the few, quiet waterside restaurants come from birds overhead or waiters snapping open bottles of Pacifico.

All activity centers on the boat dock, where launches holding 6 to 15 passengers leave every hour or so for a string of beachside villages: Playa Las Animas, Quimixto and — the farthest out and most popular — Yelapa. The trip can get quite rough in heavy seas (prepare to get wet), but as you round a rocky point and get your first view of paradise, Yelapa appears like a dream.

Verdant, green jungle pours down to a turquoise-colored bay, where on a thin sliver of sand there are a dozen or so palapa restaurants…and nothing else.

Large numbers of people settle in for the day here, snacking on grilled shrimp, fish and beer, while the waves lap up to their feet, but the town is worth exploring.

A jungle river divides the town from the restaurants; you can hike a half-mile into the jungle to the one bridge, or just wade across the knee-high stream.

There are a couple of general stores in town, and there’s a pleasant hike to a 150-foot high waterfall, but the most fun is just seeing the houses and people who live here, much like they did in Old Vallarta, where it is so quiet you can always hear the birds, the surf and the occasional clip-clop of a local riding a horse.

Sunset in Sayulita and San Pancho

Sayulita is no longer undiscovered. For years, this village an hour from Puerto Vallarta survived as an out-of-the-way surfer paradise, accessible by dirt road with a mile-long beach, big breakers, and a string of beachside palapas.

The surfers are still there, along with a wild assortment of hippies and beachcombers. There are drums at sunset, dreadlocks and bikinis, and the smell of marijuana is sometimes present.

But paved roads have brought shopping, dining and lodging (and the first major wave of tourists) to the town, which consists of a half dozen streets scattered between the beach and a plaza.

There’s still a small town feel though. Every third person seems to be holding a surfboard, and there are plenty of restaurants on the cobblestone back streets and along the beach.

Try the mixed seafood ceviche – shrimp, scallops and octopus cured in lime and fruit juices and served with green pepper, tomatoes and avocado. 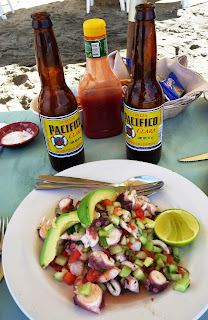 Three kilometers up the coast, Sayulita’s sleepy neighbor, San Pancho, does not exist on maps. Its official name is San Francisco, but that’s too high-sounding a name for this one cobblestone street town, so they call it by its nickname, “San Pancho.” (Pancho Villa’s real name was Francisco, so all Francisco’s are nicknamed Pancho).

This is a quiet place, except for the surf on the beach, which is a curving arc of sand between two rock headlands. Much of the beach at San Pancho backs up to private houses, which is good in that it will keep away major development. The center of town has the usual beach palapa restaurants.

The big story in San Pancho is the La Patrona Polo Club Restaurant, Bar, Lounge & Café – an incredible complex that has a full scale polo field in the center of the village with Saturday night polo games, dressage shows, and an exquisite, multi-story outdoor bar with live music after the matches. It’s simply amazing in a little town, and it certainly would have attracted John Huston, an avid horseman who was an honorary member of the Mexican cavalry.

An Unforgettable Night Under the Stars

After filming Night of the Iguana, Huston leased land from the Chacala Indians and lived for nearly two decades just south of Boca de Tomatlan in Las Caletas. Perhaps the prettiest of all Vallarta beaches, it is accessible only by sea.

Today, Vallarta Adventures has the exclusive lease and offers beach visits to Las Caletas by day, or an exciting mystical show and dinner called Rhythms of the Night, a sort of Mexican Cirque du Soleil with traditional native dancing and acrobatics that ends with a chance to dine seaside by flickering candles.

It’s a magical outdoor experience capped by an hour long return boat trip to Vallarta under the stars. Sailing along the rugged coast, past Mismaloya with the mountains looming against the sea, it’s easy to understand how this isolated stretch of coast became one of the world’s most famous resorts.

IF YOU GO: Puerto Vallarta Information