Thunder by the Falls

Walking and Drinking Beer,
On The Bloody Battlegrounds for the Niagara Frontier

At just 36 miles in length, the Niagara is one of the shortest rivers in the world. And one of the most violent. Almost a million gallons of water cascade down the river every second, reaching speeds of 30 miles per hour. The river is actually not a river at all – it is the drainage runoff from the higher Great Lakes of Erie, Huron, Michigan and Superior. Water spills down from these higher lakes into the Niagara Gorge and over the legendary Niagara Falls on its way thundering and roaring to Lake Ontario.

Another historical reason the Niagara is a violent river is that it forms the border between the United States and Canada. For 1,000 days between 1812 and 1814, it was the scene of desperate fighting with bloody battles on both sides of the river in what came to be called The War of 1812.

More than 25 percent of the casualties of the entire war took place along this 36-mile stretch of river.

Today, the U.S.-Canada border is the longest and most peaceful in the world, but for the 200th anniversary of the forgotten War of 1812, both sides are restoring forts, cleaning muskets, sprucing up battlefields and planning re-enactments. As a bonus, the battlefields and forts are just a few minutes drive from the most famous waterfall on the planet.

A Mere Matter of Marching

Events began on June 17, 1812, when the young United States declared war on the most powerful nation on earth, Great Britain. To many, this seemed like an insane act, but England had angered Americans by interfering with their commerce at sea. Equally important to expansionist Americans, the time appeared right to seize Canada. The population of the U.S. was 15 times the population of Canada. British armies were occupied fighting Napoleon on the European continent. Many people thought Canadians wouldn’t fight and might even welcome invading American armies. Thomas Jefferson wrote that taking Canada would be “a mere matter of marching.”

The Americans planned a three-pronged invasion: a force from Detroit would capture western Canada; another army would cross at the Niagara frontier, while a third would move on Montreal.

In the end, it wasn’t quite that simple. All three invading American armies were destroyed or captured. Not only were the Canadians willing to fight – they were damn good at it.

As the war progressed, American armies became better trained and scored some victories. The war surged back and forth across the Niagara River at more than a dozen battlefields. Finally, Britain won its war with Napoleon, freeing the Empire to send large numbers of trained redcoat soldiers to America. By 1814, cooler heads prevailed and the so called the War of 1812 came to a close, ending as a “draw” with the borders reverting to exactly where they were at the start. Ironically, at the end of the war Americans held Fort Erie on the Canadian side of the Niagara River while the British held Fort Niagara on the American side. 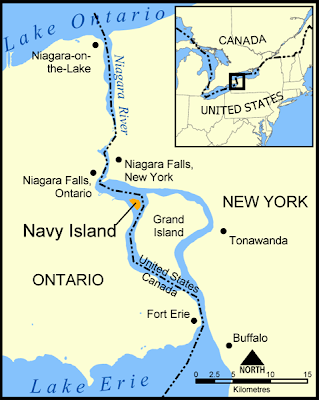 Who won the war? No territory exchanged hands, but at the start of the war, it was unclear if French and English Canadians considered themselves one country. Would they fight? Before the War of 1812, no one knew. Afterwards, no one ever questioned it again. The War became a defining moment in Canadian history and gave the country many of its greatest heroes.

Three forts and five battlefields are all within a musket shot of the Niagara River Parkway, a road that Winston Churchill called, “The prettiest Sunday drive in the world.” The best sites to visit during the 200th anniversary:

Two of the great historic forts of North America are within sight of each other, less than a mile apart on opposite sides of the Niagara River. On the Canadian side, Fort Georgehas been reconstructed as a dirt, stone and wood stockade with soldier’s barracks, a guardhouse and an excellent small museum. The Americans attacked and seized this fort in May 1813. Today, British soldiers in bright red uniforms give musket demonstrations, fire cannons and march to the sound of fife and drum. Regimental sergeants “enlist” kids into the army, outfitting them with blue or red uniforms with wood guns for some basic drill in 19th Century tactics.

On the other side of the river, Old Fort Niagara has been restored to its appearance in 1759, when the British captured it from the French in the earlier French and Indian War. But there are also military artifacts and exhibits on the story of how the British re-captured it, this time from the Americans, in December 1813. In summer, a company of redcoats guards the fort and there are ramparts and drawbridges to explore, as well as regular reenactments and military and Native American encampments.

Niagara on the Lake:

With an ideal location on the banks of Lake Ontario, the town offers a pleasant main street lined with flower baskets, art galleries, craft stores, restaurants and pubs. The surrounding gently rolling landscape is home to 30 wineries that produce 80 percent of the wine in Canada. Stop by the Angel Inn, an authentic-looking English pub, for a pint under a low timber ceiling. The Americans burned this beautiful village to the ground in 1813, but today it is called “the prettiest town in Canada.”

On June 22, 1813, American officers took over the home of James and Laura Secord in Queenston, Canada, and began planning a secret attack on a nearby British army. James was bed-ridden recovering from a wound, and the Americans dismissed Laura as just a woman of no concern. They were wrong. Laura overhead their plans, snuck out of the house, and walked 17 miles in the dark, past hostile Native American camps, to warn the British outpost. The next day, it was the Americans who were surprised and their entire army was forced to surrender. 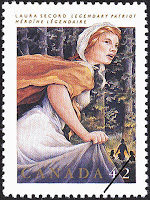 Today, Laura is a Canadian hero. You can visit her homestead where she overheard the plans, follow her 17-mile trek on a driving route, walk the battlefield where her husband was wounded at Queenston Heights, or stand by her grave, which is at a cemetery on another battlefield, Lundy’s Lane, in downtown Niagara Falls, Ont.

The Niagara Falls Museum, a short walk away, has Laura’s bonnet and some of her other possessions, as well as a superior museum on the battle and the war for the Niagara region. They also have British uniforms and shakos (their hats) that you can try on, while hefting a Brown Bess musket.

Old Fort Erie is the site of the largest and bloodiest battlefield in Canada, and their worst defeat of the war. Although it is on Canadian soil, in the battle, the Americans were defending the fort and the British were attacking it. This means in the resorted fort of today, Canadian historical interpreters wear American uniforms. When they conduct cannon firing demonstrations, the fort’s historians are careful to point the cannon toward Lake Erie and not toward visible Buffalo, New York. Firing a cannon at America might be considered an act of war. This large fort has ramparts lined with guns, soldiers in uniforms from both armies, and the best and most comprehensive War of 1812 museum in the Niagara region.

In the gift shop, they sell two different bumper stickers that ask the same question, “Who won the War of 1812?” One says the Americans, and one says the British.

And then, of course, there are the famous falls that attract some 12 million honeymooers and sightseers a year. And justly so. They are amazing. Some quick tips on seeing the falls along with the forts:

The views are superior on the Canadian side, and that is where to stay. But do walk across the Rainbow Bridge to the U.S. on a day trip for the spectacular views and to visit Cave of the Winds. Here, an elevator takes you down 175 feet of solid rock to within 20 feet of the base of the falls. You must trade your shoes in for plastic flip-flops and a poncho, and you’ll be thoroughly soaked, but standing at the bottom is the true way to appreciate the power of the falls.

Ride the Maid of the Mist. Boats have been carrying passengers up the river to the base of the falls since 1846, and they have all been called Maid of the Mist. You’re guaranteed another soaking – and a thrill, as your boat rocks and rolls in the churning waters under the falls.

Be prepared that Niagara Falls is a schizophrenic destination with two distinct personalities. Queen Victoria Park along the gorge on the Canadian side is majestic – a wonderful green space with gardens and continual views of both the American and Canadian falls. The Niagara Parks Commission does everything first class, the part of Niagara Falls that they run compares with any national park in the world. It is best in early morning before the tour buses arrive at 9 a.m. or at twilight, when crowds are at a minimum.

But be warned. The rest of the town of Niagara Falls, particularly Clifton Hill, can be dreadful — a loud, tacky tourism nightmare with haunted houses, a “Hall of Fame” dedicated to serial killers, wax museums, miniature golf, and other oddities. There are also two casinos, every chain restaurant and a dozen other ways to see the falls, from helicopters to IMAX films to huge towers.

But it’s always easy to escape the madness. From anywhere in town, it’s no more than a ten minute walk to the park and a drop-dead view of the falls…and if you’re lucky, a rainbow.

Beer on the Niagara Frontier:

Niagara is not a craft beer center. This is wine country with 80 percent of Canada’s wine produced in the region. The nicest bar in Niagara Falls, Ont., is in EdgewatersRestaurant. Run by the Niagara Park Commission, it’s in the park near Horseshoe Falls. There’s an outdoor patio and a nice bar with views of both the American and Canadian falls. Try the Creemore Springs larger from Toronto.

Kelsy’s is another outdoor bar at the top of Clifton Hill. It’s in the center of the insanity, across the street from the Criminal Hall of Fame, but they have a live singer, and you’ll need a beer after experiencing Clifton Hill.

For great craft beer, travel 90 minutes to Toronto. Steam Whistle Brewery is built in an old roundhouse in the center of town; their pilsner is a popular beer available all over the city. Mill Street Brewpub is in the Distillery District, a fashionable area of old warehouses that are now restaurants and one-of-a-kind shops. Worth the short cab ride.