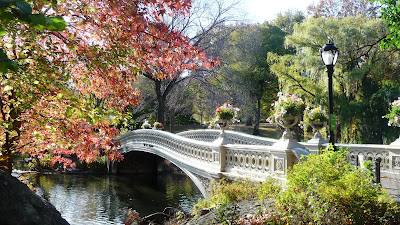 Strolling New York’s Central Park is one of the great urban walks of the world and as a bonus, it offers the best outdoor bar in Manhattan.

Of course, you’ll have to share that bar with the park’s 25 million annual visitors. This is the most popular green space in America – and the most recognizable. More than 200 films have been shot here. From romantic Annie Hall to Death Wish, Love Story to Fatal Attraction, Central Park has seen it all.

But strangely, most of the people who visit the park have no idea what they are seeing. 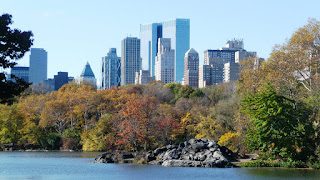 As they stroll down the shady 58 miles of paths through a landscape of rolling lawns, trees and lakes, populated above by some 250 species of birds, they have little awareness that 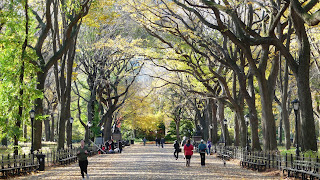 they are walking in one of the greatest man-made wonders of the world.

Because everything in this lovely park of 500,000 trees, shrubs and plants was created by man, all in an area that once was a dismal swamp.

When the idea of a park was first proposed in 1844 by newspaper editor William Cullen Bryant, New York had a population of a half million people, most living in crowded and cramped conditions below 38th Street. Bryant proposed creating a public park that would offer families a place to escape for carriage rides and give working-class New Yorkers a “healthy alternative to the saloon.”
By 1853, the city had spent $5 million to buy 6 percent of Manhattan Island – a slice of property a half-mile wide by 2.5 miles long. The land was basically worthless for development and filled with swamps, bluffs and rocky outcrops, as well as being home to some 1,600 poor Irish pig farmers and 3,000 African Americans, all of whom would have to be relocated. 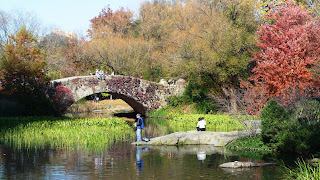 There was no public landscaped park in America at this time, so in 1857 a landscape design competition was held to decide what to do with all this space.

The winning design, submitted by the park’s superintendent, Frederick Law Olmsted, and an English born architect and gardener, Calvert Vaux, called for creating pastoral landscapes reminiscent of English paintings filled with rolling meadows and deep woods, offset by huge public spaces where the elite of New York could gather and stroll on terraces. Commercial roads through park would be sunk nine feet deep so that bridal paths and 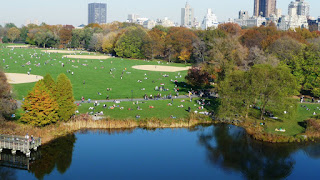 walks would go over them uninterrupted on a series of 36 bridges.

Building the park became one of the most massive construction projects in New York history. Twenty thousand Irish workers labored for 15 years. More gunpowder than was exploded at Gettysburg was used to blast out mountains of rock, while an estimated 10 million horse-drawn carts rolled in and out of the park, dragging away debris and swamp and bringing ba 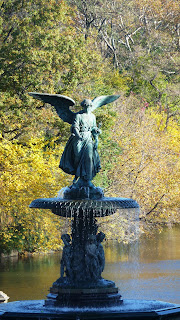 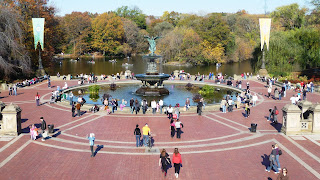 In its first decades, the park was a place for the wealthy, who arrived by carriage in top hats to stroll the Mall. But as poor immigrants moved north on Manhattan, eventually surrounding the park, its character changed.

By the 1970s, Central Park was one of the most dangerous places in the city with every building covered by graffiti, while park benches were missing their slats and garbage and litter were everywhere. 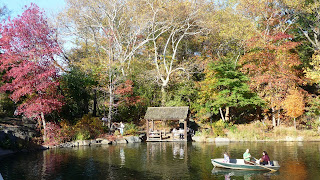 Then in 1980, control of the park was given to the Central Park Conservancy (http://www.centralparknyc.org/). To date, this private, non-profit organization has raised more than $500 million and restored Central Park to the brilliancy of the original design by Olmsted and Vaux. A team of 49 gardeners keep the 843 acres in immaculate condition. Today, the park is safe, spotlessly clean and litter-free.

Amazingly, all 125 water fountains work, while the scrubbed restrooms play classical music. Dogs can walk in many places off leash, and the park is filled with music 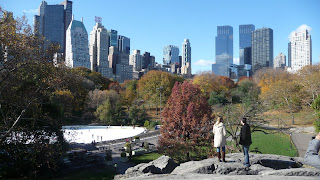 ians and music of all kinds.

Most visitors enter Central Park from the south at 59th Street, either by the Plaza Hotel on 5th Avenue or Columbus Circle on Broadway. There are maps posted in logical places, filled with photos of nearby things to see. A new feature asks cell phone users to call (646) 862-0997.

Touch tone the extension posted at different sites and you can hear celebrities describe what you are seeing, from Whoppi Goldberg talking about Wollman Skating Rink to Sarah Jessica Parker reminiscing at the Pond to Jerry Seinfeld telling jokes about the Mall.

There are bike tours, bike rentals, walking tours, pedi-cabs and surprisingly inexpensive horse-drawn carriage rides (just $34 for the first half hour, $10 for each additional 15 minutes).
But the best way to experience the park is to just wander, get hopelessly lost and look for these treasures along the way. 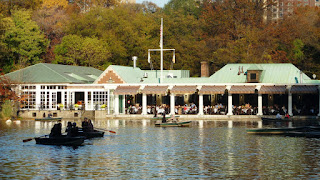 rkboathouse.com/house.com/) The restaurant is expensive, but go into the restaurant and to the left and there is a green outdoor bar with lakeside tables and chairs. It’s all self-sea

ting, so grab a $7 Stella at the bar, fight your way to a table and enjoy the best outdoor view in New York. The restaurant bar also overlooks the lake and would be a little warmer in inclement weather. There are 100 boats for rent here too, as well as bicycle rentals.

The Pond and Gapstow Bridge (62st Street): Similar to the Ponte di San Francesco in San Remo, Italy, this graceful stone bridge is an icon of Central Park and the subject of many posters and postcards. The banks of The Pond are lined with flowers; the reflection of the nearby skyscrapers make this one of the park’s most visited spots.

The Mall (66th Street): One of the grandest elm-lined walkways in the world, the Mall is a four-block-long pedestrian promenade where you’ll find many of the park’s 51 statues.

Bethesda Terrace & Fountain (72nd Street): The “heart of the park” is this ornamental fountain and terrace. It is probably the park’s most photographed spot. Two sweeping staircases lead down to a terrace, where the gentry of New York once came to be seen. Today, it is one of the best people-watching spots in New York and home to world-class street performers. 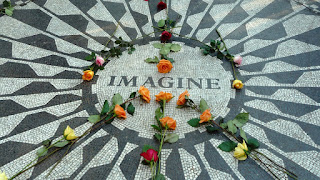 (72nd Street): On December 8, 1980, John Lennon was shot dead as he entered his home at the Dakota Apartment Building at 72nd and Central Park. The former Beatle loved walking in the park with his wife and young son.

Through the generosity of his widow, Yoko Ono, a 2.5-parcel of the park was re-landscaped and named Strawberry Fields, in honor of the Beatle’s song, Strawberry Fields Forever. From Yoko’s 7th floor apartment in the Dakota, the area looks like a giant teardrop. Ten thousand tiles from Italy spell out a simple mosaic with just one word: “Imagine.” Strawberry Fields opened on October 9, 1985, which would have been John’s 45th birthday. Today, music fans gather here every year on that date.


Bow Bridge and the Lake (73rd Street): Another classic movie location, Bow Bridge was completed in 1862 and was built entirely of cast iron. The 22-acre lake is best seen by row boat, with looming skyscrapers in the background. You can get a boat at the Loeb Boathouse for just $12 an hour.

The Ramble (77th Street): Just north of the lake, walk under the picturesque Ramble Arch into a maze of trails and paths through a forest woodland with streams and waterfalls. Though it looks wild, every single thing was planned and planted. Olmsted wrote: “Every foot of the park, every tree and bush, every arch, roadway and walk, has been fixed where it is with a purpose.”


Belvedere Castle (79th Street): Designed in 1865, this castle offers breathtaking views over the Great Lawn and is an entry way to the Shakespeare Garden, a quiet place in the park where the only plants are flowers that were mentioned in Shakespeare’s plays. This is the main weather station for New York. You can climb to the top tower on stone circular stairway.


The Obelisk – Cleopatra’s Needle (82nd Street): The oldest monument in America was erected in Heliopolis around 1500 B.C. and moved by Rome’s Augustus Caesar to Alexandria in 12 B.C. Depending on who you ask, it was either given to America as a token of good faith or stolen by William Vanderbilt, but in 1879 it came to New York and was erected near the Metropolitan Museum of Art. The amazing museum, perhaps the most celebrated museum in America, sits nearby at 81st Street and is, of course, worth a day on its own.

Jacqueline Kennedy Onassis Reservoir (90th Street): This 106-acre reservoir is 40-feet deep and holds a billion gallons of water. The 1.58-mile running track along its edge is one of the city’s favorite jogging spots. Since the reservoir no longer supplies water to New York, there is great debate about what to do with it, ranging from adding beaches, restaurants and marina to filling it in for ball fields.

Conservatory Garden: This hidden gem at Fifth Avenue and 105th Street is actually three gardens based on classic English, French and Italian designs. Filled with fountains and flowers, walkways and tree-shaded paths, it is the only formal garden in Central Park, and one of the park’s most secret and deserted retreats.

lington Statue: This rather bizarre statue sits at the top of the park’s northeast corner at 110th Street. Dedicated to the African-American jazz composer and band leader, the monument has Duke standing next to a piano on top of pillars made up of nine very shapely nude women. They’re supposed to be the “muses” that inspired him. Okay. But it’s no wonder they called him the “Duke.”

Wollman Rink (62nd Street): From mid-October through March, one of the highlights of Central Park is skating on this 33,000 square foot rink, surrounded by skyscrapers and views. In fall, the white of the ice is offset by the color of the surrounding trees. Climb the rocks above the skating rink for one of the best views in Manhattan.

IF YOU GO: Central Park also has a famous zoo, a Shakespeare theatre, the famous Tavern on the Green restaurant, four inexpensive outdoor cafes, and the Conservatory Water, where the little mouse Stuart Little had his famous boat race and where New Yorkers sail model boats on the weekend. And that’s just the beginning. There are two excellent Web sites for information: http://www.centralparknyc.org/ is the Conservancy’s site; and http://www.centralpark.com/ is a commercial site. Columbus Avenue runs parallel to the park two blocks away and is lined with outdoor cafes and great bars.