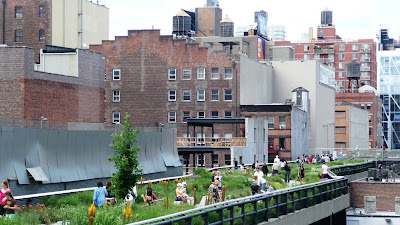 With hip new beer gardens on either end and two of the city’s best outdoor bars in-between, the High Line is one of the best places to walk and drink beer in New York City.

This new, one-of-a-kind park, offers a zen-like paradise of trees and flowers, high above the noise and chaos of the city. It’s great people-watching, great beer, and a rare New York opportunity to stretch your legs without stoplights. 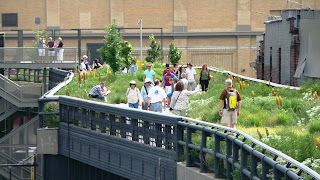 For 30 years, the High Line was an ugly, rusting, eyesore — an abandoned elevated railway that ran along Manhattan’s West Side from 34th Street south to the Meatpacking District. It had been built in the 1930s to take dangerous freight trains off the streets.

The elevated railway made it possible to carry trainloads of milk, meat and produce to warehouse loading docks that were built 30 feet above the busy streets below. But over the years, trucking became the main way of bringing in goods and use of the elevated railway declined. The last train to rumble down the overhead tracks was three carloads of frozen turkeys in 1980. 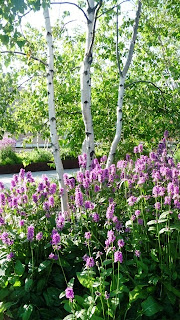 Abandoned, the rails were soon covered with wild weeds and flowers and urban renewal called for the whole crumbling line to be demolished.

Enter the Friends of the High Line. Formed in 1999 by community residents, the group had the vision to imagine the High Line as a unique park. That dream was finally realized when the first section from 20th Street to Gansevoort Street opened in June 2009, followed by a second section that extended north to West 30th Street and opened in June 2011. Total cost: $153 million. 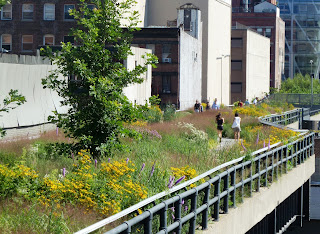 Today, the High Line is a thin, narrow ribbon of a park, 40 to 50 feet wide, with more than 200 species of grasses, flowers and trees that meanders for 1.5 miles through New York, 30-feet in the air.

Walking the High Line offers a unique view of the city. Unlike New York’s other elevated railways that ran directly above a street, the High Line was designed to run down the center of the block, going right smack through the middle of buildings.

Along the way there are views of the Statue of Liberty and the Empire State Building, as well of the trendy Meatpacking District, where you now look down on old warehouses are today filled with chic clubs and outdoor restaurants. But it’s the strange feeling of floating in a garden high above the city that makes the High Line such a trip. A few beers doesn’t hurt.

Grab your first one at the Lot at 30th, an outdoor beer garden built under the railway at 10th Ave. and West 30th. There’s a food truck roundup with a half dozen trucks selling tapas and tacos, while Colicchio & Sons has an outdoor bar with local NY beers and wines. Try the High Line Elevated Wheat from Brooklyn Brewery.

There are big long tables to share your food and drink with local New Yorkers.Then climb three stories and get on the High Line as it makes a long slow curve heading south.

A walk on the High Line is meant to be a slow stroll, taking time to enjoy nature. Bikes and rollerblades are forbidden. There are plenty of sleek wooden benches along the way for sitting and sunning and there’s even a section of lawns. At night (the park stays open until 11 p.m.) the walkways are illuminated, creating eerie scenes as they cut through, under and between modern buildings.

The northern section is the prettiest. Called the Chelsea Grasslands, it’s a meandering path through small fields of colorful flowers and grasses. Here and there, the outline of the original tracks have been left, or worked into the pattern of the pathway.

The Diller- von Furstenberg Sundeck between 14th and 15th Streets has comfortable wood deckchairs and benches surrounded by wildflowers, fountains and sumac trees. It’s a perfect place to relax and people-watch, as a steady stream of New Yorkers stroll by. 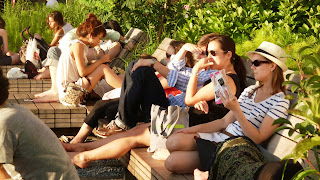 The 10th Avenue Square has a small amphitheatre providing a unique view of busy Tenth Avenue below, while the Washington Grasslands between 12th and 13th preserves the native grasses and flowers that grew up between the abandoned rail lines and gives some idea of what it looked like before being turned into a park.

At the southern end is the Gansevoort Woodland, a thicket of birch and serviceberry trees with vines that hang over the railing creating a green balcony for those below.

There’s plenty of food and drink on and below the High Line. The Porch at 15th is a hanging elevated outdoor bar with tables and umbrellas, just below the High Line, but still above the streets. They offer changing New York wines and beers, the current offerings written on a chalkboard. Try the Empire IPA from Syracuse if they have it.

There are stands selling gelato and coffee, ice cream sandwiches, and plaetas (ice pops) in flavors ranging from mango-chili to hibiscus to coconut.

You can hop down from the Highline at 16th and visit Chelsea Market, a two square block food market in an old 1890s bakery that once made Oreo cookies. Everything you could possibly imagine to eat is here, each with its own specialty shop. There are nuts and chocolates, bakeries, sandwiches, fresh fruit and even a lobster bar. It’s worth a visit.

At the far southern end at Gansevoort Street, again built under the Highline, is The Standard Biergarten, an authentic German biergarten with long outdoor wooden tables, pretzels, currywurst and German and Austrian beers such as Ayinger Weisse and Kostritzer Dark Bier. The location under the elevated railway gives it a cozy feel.

A block across the street is the legendary Hogs & Heifers. This is the classic rock ‘n roll dive bar that in 1992 started the tradition of scantily clad bartenders and patrons dancing on the bar, a routine now copied by Coyote Ugly and others. Decorating the walls are 11,000 bras donated by patrons, including one from Julia Roberts.

A better peep show is back up on the High Line looking towards The Standard Hotel, a trendy highrise glass building that straddles the walkway. The hotel features floor to ceiling glass walls in all its rooms and even in the restrooms of the restaurant on the top floor. The hotel warns guests that the windows are very transparent and “activity in your room, when the curtains are open, may be visible from the outside.” I’ll say.

You can see right into every room in a bizarre scene that resembles a set from the Alfred Hitchcock movie, “Rear Window.” The people in the rooms either don’t know, or don’t care. One guy, who looked like he’d been lingering on the High Line for days, told me, “there’s something happening in one of the windows every minute.” From the minute I spent there looking, I can believe him.

One final bar worth a stop is the Half King, located just under the High Line at the 23rd Street stairway. This classic pub has more than 50 literary readings a year and is owned in part by writer Sebastian Junger, author of The Perfect Storm.

Whether you stay inside by the candlelit tables in a maze of rooms, or sit on their streetside patio, one of the nicest outdoor bars in the city, this is a great pub with more than a dozen beers. Try a local Greenport Harbor Ale. 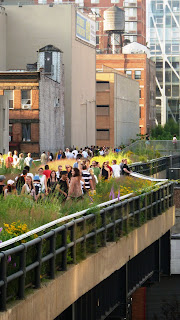 There are numerous events along the High Line, from guided walks on Saturdays to stargazing with the Amateur Astronomy Association, every Tuesday. http://www.thehighline.org/