New England in a Nutshell: Nantucket and Martha’s Vineyard 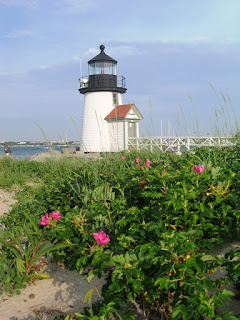 No place epitomizes the New England of popular imagination better than the islands of Nantucket and Martha’s Vineyard.
Located 20 miles off the south shore of Cape Cod in Massachusetts, Nantucket is a step back in time – a New England “theme park” filled with stately white sea captain houses, cob 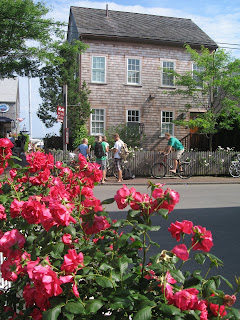 blestone streets, lighthouses, weather-beaten shingle cottages, flower boxes of pink geraniums, lobsters pots and flying above it all, squawking sea gulls.
There are no fast food outlets, no neon signs and not a single stoplight on the 14 by 3.5-mile-long island. But there are bicycles – thousands of them. Bicycling is one of the easiest and best ways to get around, especially to the 100 miles of sandy beaches that ring the island – all of them open to the public.
At 9 by 23-miles-long, Martha’s Vineyard is slighter larger than Nantucket, but it’s also closer to the main shore, just 45 minutes by ferry from the mainland 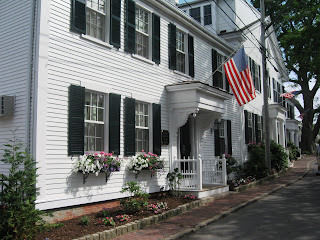 . There are two good-sized towns on the island, linked by bicycle paths. Edgartown, made famous by its Kennedy associations, is the quintessential New England seaport with shady streets of big white 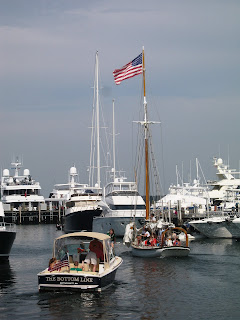 mansions, many with their own boat dock in the backyard and offers a pleasant town center of brick sidewalks, bookstores and outdoor cafes. Oak Bluffs is the island’s principal town. The main drag has a seashore honky-tonk atmosphere with electronic game rooms, ice cream parlors and t-shirt shops, but the back streets have a relaxing charm and are known for their brightly painted Victorian gingerbread cottages.
Although both islands have dozens of bed & b 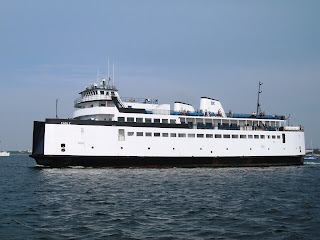 reakfasts, cottage rentals and wonderful old inns, staying there in the summer (when Nantucket’s population swells from 10,000 to 40,000) can be pricey.
A more economical alternative is to stay in one of the many family motels on Cape Cod and visit Nantucket and Martha’s Vineyard on day trips by ferry. From Hyannis Port, ferries sail the 20 miles of open water to Nantucket in two hours, adding a pleasant ocean cruise to the day. In summer, ferries depart as early as 7:30 a.m. and return as late at 9 p.m., so it’s possible to have a full day on the isla 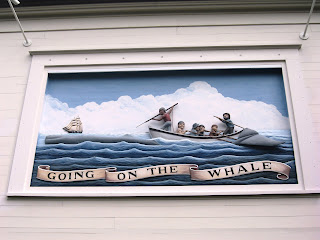 nd.
For variety, another day can be spent on Martha’s Vineyard. Ferries go to Oak Bluffs or Edgartown. There are bike rentals in either town, so it’s easy to bicycle ride between them and much of the route is along pretty beaches.

Here are some images from a one-day visit to each island in July.

From the mid-1700s to the late 1830s, Nantucket was the whaling capital of the world with as many as 150 whaleships based here. Voyages in search of sperm whales could last three years, taking Nantucket sailors to Africa, the Pacific and as high as the Artic Circle. Nantucket town (both th 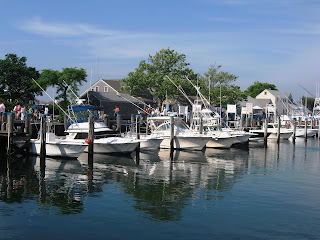 e island and the main town are called Nantucket) became the third largest city in Massachusetts and the wharf was filled with warehouses storing whale oil. It was said that approaching from sea, you could smell Nantucket before you could see it. 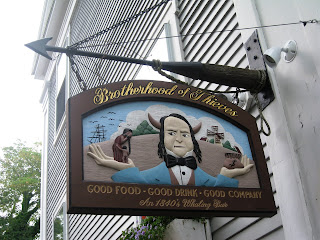 ays. To catch a whale, a half dozen men would row a 25-foot boat for miles, creeping up on the 60-foot long mammal until they could throw a harpoon attached to a rope into its side. Then would begin what was called “the Nantucket Sleigh Ride,” as the enraged beast pulled the wh 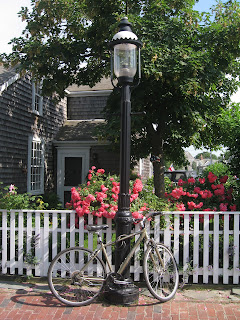 aleboat bucking and bouncing over the waves for miles, at speeds up to 20 knots. The first harpoon wouldn’t kill the whale, but would tire it out. The whalers would then pull the rope in until they could get close to the exhausted beast, and plunge a second harpoon into its heart. 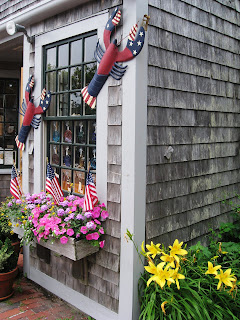 Cutting up the whale to boil its blubber for oil was backbreaking work. A foot square, eight-inch piece of blubber could weigh 400 pounds.

Icons of sperm whales, identified by their large, flat head, decorate Nantucket, from door knobs to weather vanes. The head of a sperm whale could contain up to 500 gallons of spermaceti, an oil that made fine candles. At its height, Nantucket had 36 candle factories. From 1804-18 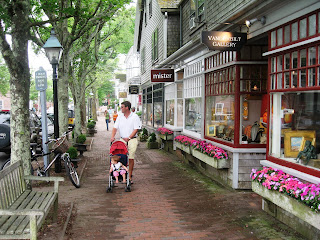 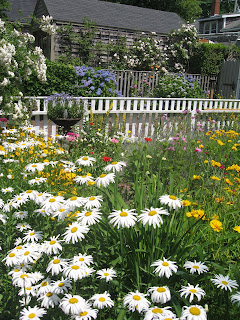 perm whale population has come back and there are 1.5 to 2 million sperm whales alive today – the largest number of any great whale.

Several of Nantucket’s main streets are covered in cobblestones that originally served as ballast in sailing ships. They’re pretty to look at, but make for difficult biking downtown. However, the backstreets of the village are flat, lined with gorgeous houses and gardens, and easy pedaling. 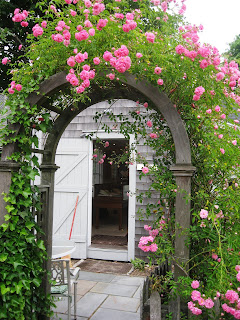 In 1838, it was discovered how to make kerosene from petroleum and the whaling industry was doomed. Compounding the problem, in 1846 a fire swept through Nantucket. Ironically, the fire was increased by the giant warehouses of whale oil, which burst and sent rivers of flaming oil down the streets. When it was over, the whale’s “revenge” had destroyed a third o 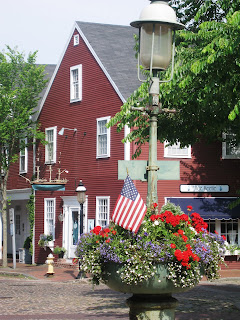 f the town. But Nantucket was quickly rebuilt in brick and many of the lovely shops and art galleries lining the main streets today come from this period.

In Nantucket, you are never far from a garden or flowers. The combination of sea air, sunshine and sandy soil make Nantucket a gardener’s dream. Seemingly every weather-beaten cottage has a flower box, and the streets are lined with flower baskets and public gardens. 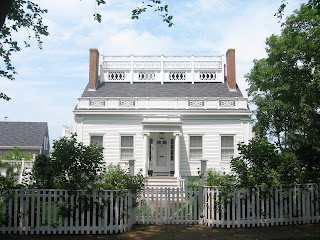 Many of the historic, white ship captain’s houses have what is called a “walk” along the roof. The platform allowed occupants to pour sand down the chimney, but more important, they were used by wives to stare out to sea searching for returning whaleships, which could often be gone for three years at a time. But Nantucket wives didn’t seem to pine too much for their husbands. An island song called the “Nantucket’s Girl’s Song” went: 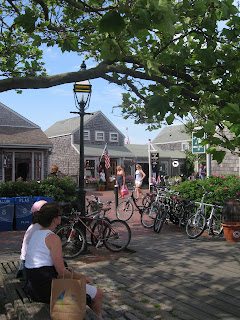 Then I’ll haste to wed a sailor, and send him off to sea,
For a life of independence, is the pleasant life for me…
But when he says “Goodbye my love, I’m off across the sea,”
First I cry for his departure, then laugh because I’m free.
The pleasant streets of Nantucket town are lined today with beautiful shops, art galleries and restaurants. The upscale village attracts some of the world’s wealthiest visitors and shoppers, but you don’t have to spend a fortune. You can’t go wrong with any pub in town, or visit the Straight Wharf Fish Market, where they’ll cook up freshly caught fish for you to eat on a patio overlooking the water.

Martha’s Vineyard is best known for the brightly decorated gingerbread cottages of Oak Bluffs. This area of town started as a Methodist 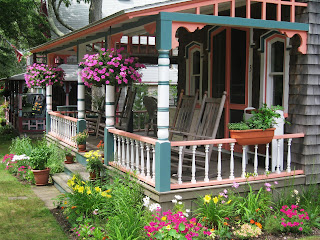 campground retreat in 1835, but slowly the tents were replaced with tightly packed cottages. 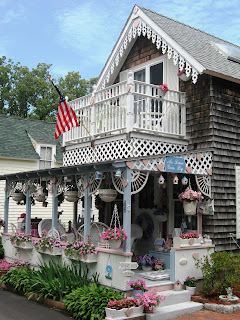 re, including Ulysses S. Grant. Despite its religious history, Oak Bluffs and Edgartown are the only two places on Martha’s Vineyard where you can purchase liquor – the other communities are dry. If you’re thirsty after a bike ride, try 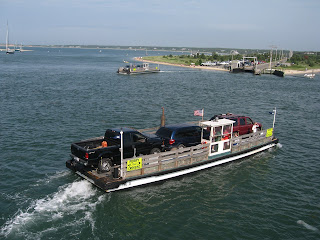 the Offshore Ale Company in Oak Bluffs, which has a wonderful IPA and a great pub setting.

Edgartown is where you can catch the three-car ferry to Chappaquiddick Island. The flat island has miles of bike trails. 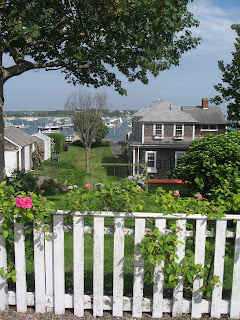 You are never far from the sea in Edgartown. Old homes line the harbor and many have their own boat docks.

Purpose of this Blog Drinking Your Way Through the English Countryside