Drinking Your Way Through the English Countryside 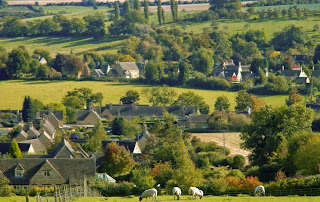 There’s no better way to see the English countryside than by walking from village to village on public footpaths, strolling across rolling green hills dotted with sheep and dry-stone walls. And of course, no hike in England is complete without stopping now and then for a rewarding pint of beer, served fireside in a cozy country pub.
The difficulty is getting to the trailhead. Driving on England’s narrow country roads can be frightful and expensive with gas selling for $8 a gallon. The solution is to do what the locals do and take independent day-trip excursions to the countryside by train and country bus. You can hike from one rail station to another, visit a number of country pubs along the way and be back in the city for dinner and theatre.
Train schedules are easily obtained online or at the station and country bus schedules are usually posted in the 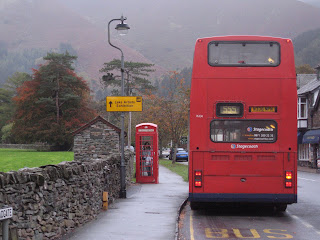 center of the village, near a pub or town hall. The buses are timed to meet trains and locals are helpful in providing advice. Should you miss the last bus, country taxis are available and since the distances are small, they are relatively inexpensive. However, be warned: country buses don’t run on Sundays.
Here are three easy hiking by train and bus excursions.

The Cotswolds from London
The Cotswolds are the England of calendars and picture books – a green and pleasant land filled with honey-colored stone cottages covered with climbing roses, lush hillsides crisscrossed with a maze of dry-stone walls, tiny villages with wood smoke curling from the chimneys and everywhere you look, sheep. It was wool that made these villages prosperous, but the wool trade is long gone and without direct rail connections, most of the villages in this ru 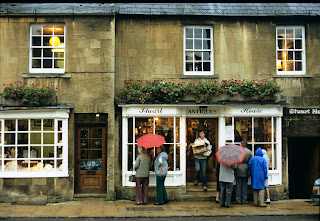 ral area have remained unchanged for hundreds of years.
The easiest rail connection from London to the Cotswolds is to take the train to Moreton-in-the-Marsh, an easy 90-minute trip from Paddington Station with trains leaving every hour or so. Buy the one-day return ticket to save money. Moreton has been a working market town since the 13th century and is one of the least touristy in the Cotswolds. It’s just a short walk from the station to the wide streets of the town center, which are lined with butcher shops, gift st 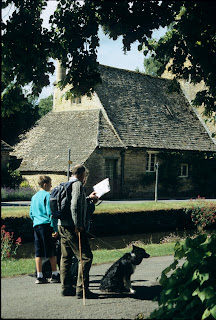 ores and of course pubs. At the Market Hall you can catch buses to a number of the Cotswolds’ most famous villages. Copy the schedule down because Moreton is the only Cotswolds town with rail connections and you’ll need to get back here on the last bus.
From Moreton, it’s easiest to take the bus to Broadway. This is one of the classic honey-colored stone Cotswold villages, lined with contemporary (and expensive) shops and tearooms. It’s a big tourist center, but worth a look around. Try the Horse & Hound for an early fireside pint of beer.
England has a number of long-distance paths that wind for hundreds of miles through the countryside. The 100-mile-long Cotswold Way is one of these, and you can pick it up in Broadway for a four-mile hike to Chipping Campden. The hike begins from the west side of town with a steep climb to Broadway Tower, a folly that was built in 1797 to look like a medieval castle. On a clear day, you can see 13 counties from here – one of 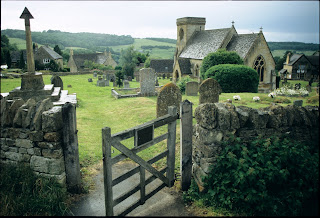 the grandest views in the area. The path continues northeast along the ridge through fields and woods, dropping down at last into the pleasant stone village of Chipping Campden.
In the Middle Ages, this was one of the most prosperous towns in the area. The Gabled Market Hall dates to 1627 and the High Street is lined with elegant stone buildings that now house chic antique stores, shops and pubs. The Eight Bells pub just off High Street was built in the 14th century and is a wonderful place for a pint. Or walk along the road to nearby Broad Campden to see some quaint thatch-roofed cottages and have a pint in the delightful Bakers Arms.
From the plaza in front of Market Hall, it’s possible to catch a bus going to Burton on the Water, perhaps the most touristy of the Cotswold villages, but with good re 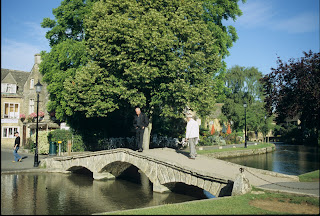 ason – the town is simply gorgeous. The river Windrush flows quietly through the center of the village and is spanned by a series of elegant arch stone pedestrian bridges. Swans and ducks swim in the stream and there are a number of pubs with pleasant outdoor p 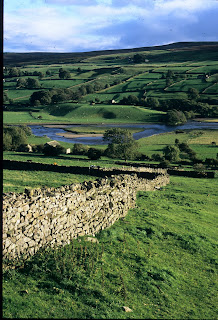 atios overlooking the water. Try the Kingsbridge Inn or the Old Manse Hotel. There are tourist attractions here – a miniature model of the village and a motorcar museum – but there are also public footpaths that leave the village for quiet walks away from the crowds. If you’ve been moving fast, it’s possible to squeeze a two-mile walk to Lower Slaughter, yet another picture perfect stone village, and still be back to Burton for the last bus to Moreton.
Since the last bus is in the late afternoon, you can be back in London by early evening…or stop off in Oxford on the way back and have dinner in this beautiful university town. Your round-trip train excursion ticket allows you to get on and off as often as you like in the same day.
Train schedules: http://www.nationalrail.co.uk/
Bus schedules: http://www.pulhamcoaches.com/

The Peak District from Manchester 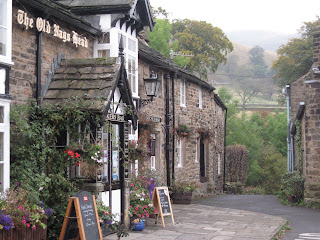 One-third of Britain’s population lives in the industrial area around the cities of Manchester and Sheffield, but surprisingly, right in the center of these two metropolitan areas is the Peak District, Britain’s first National Park. Unlike America, most of the land in British national parks is privately owned, but it is protected and open to hiking through a series of public footpaths.
The Peak District is an area of rugged beauty with steep vivid green valleys (called vales), tumbling rivers, and gray stone villages, all mixed with high, brooding moors and some of the country’s highest peaks.
A great train hike from Manchester is to take the 8:44 a.m. Hope Valley Line from Manchester Piccadilly Station to the tiny village of Hope. The ride through beautiful green countryside takes 50 minutes. From the 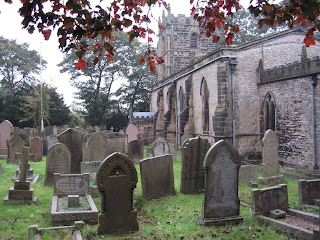 station, it’s a 20-minute walk along the main road to Hope, a village of two pubs, a post office and a medieval church dating to 1200. Just past the church, take a left and in a short while there is a level public footpath that winds beside a stream for three miles through sheep fields to the beautiful village of Castleton.
This quiet tourist center has more than 50 public footpaths, a number of tearooms, six pubs, a looming ruined castle built by Henry II in 1157 and a collection of shops that sell the famous Blue John stone – a purplish-blue form of fluorspar that is found only here. Tourists have been coming to Castleton for 300 years to visit nearby Peak Cavern.
The Peaks District National Park has an information center in town, where for 40 cents you can purchase the W 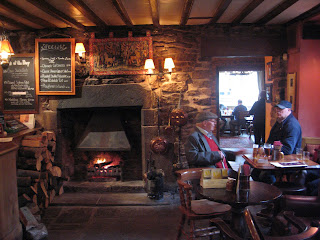 alks Around Castleton leaflet that details seven walks lasting from two hours to a full day. Plan your hike while you have a pi 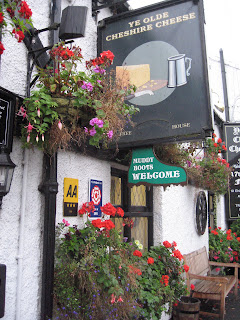 nt by the fire in The Castle pub, or down the road in the flower-covered Cheshire Cheese, which proudly proclaims on their hiker’s pub sign that “muddy boots are welcome.”
A pleasant four-mile hike from Castleton climbs up a ridge to Hollins Cross, from which it’s an easy scramble to the summit of Mam Tor. At 1,695 feet, it is one of the highest peaks in the area. From here you can drop down the other side of the ridge to the pretty village of Edale and a rewarding pint of local Cumbria Ale at the Old Nags Head. This is a famous hiker’s pub because the 250-mile long Pennine Way begins in their car park and zigzags north all the way to the Scottish border.
Cute Edale has two pubs and another National Park information center. Trains leave every two hours for the return trip to Manchester. 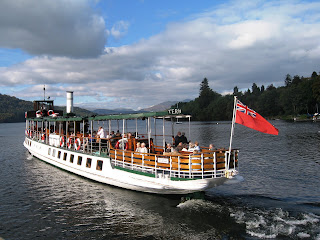 District from Windermere
England’s most rugged hiking area is too remote for day trips from a city, but the town of Windermere has easy rail connections and an abundance of b&b’s. It is about two hours by rail from Manchester.
From this lakeshore town, you can travel by local bus, lake steamer excursion boat or by foot out into some of England’s most l 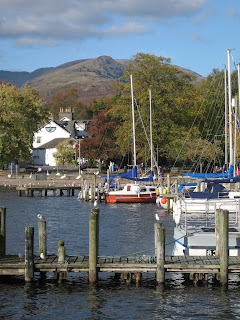 ovely countryside – all without the hassle of a car or driving.
The beauty of this area of mountains, lakes and valleys was immortalized in the poetry of William Wordsworth and in Beatrix Potter’s stories such as “Peter Rabbit.” Both of them lived here and you can tour their homes.
No place in England offers more possibilities for pub walks. There a 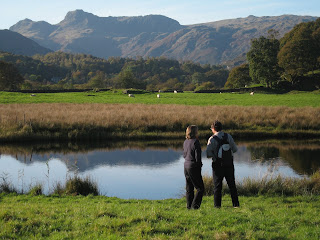 re at least a dozen guides that suggest hikes from Windermere and the other Lake District town centers, most of which can be reached by local bus. The Stagecoach Mountain Goat line offers a bus and ferry route to the attractive nearby villages of Hawkshead and Coniston. Their Web site www.lake-district.gov.uk/map offers suggested hiking t 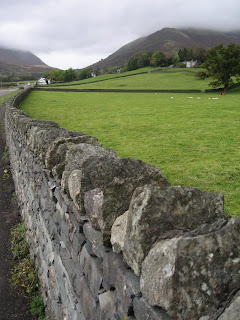 rails in the area. A 10 a.m. coach from Bowness (Windermere’s adjacent sister town) will have you in Hawkshead by 10:30. This is a cute village of whitewashed buildings with four pubs, hanging flower baskets, twisting narrow alleys, some 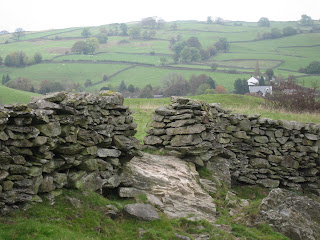 nice shops and a wide variety of hilly hiking trails. If the weather is clear, stop in the King’s Arms for a fireside pint and directions for the steep two-mile climb up Latterbarrow – a hilltop with a rewarding 360-degree view of Lake Windermere and the surrounding area.
Hourly buses continue on to Coniston, yet another quaint stone vi llage with riverside pubs and gorgeous views of the surrounding mountains. Here, you can catch a boat to the far end of the seven-mile-long Coniston Water and hike back to town along the shore.
Another option from Windermere is to board an old lake steamer at Bowness and sail north to the far end of Windermere Lake to Lakeside, where the pretty Lakeside Inn has fine hand pulled ales and picnic benches overlooking the water.
There are several easy hikes from here, or take a bus a few miles west to Skelwith Bridge, where you can pick up the Cumbria Way, another of Britain’s long distance footpaths. The trail here is easy as it follows a meandering stream with mountain views of the Langdale Pikes, before heading back to the bus stop at Skelwith Bridge Hotel. 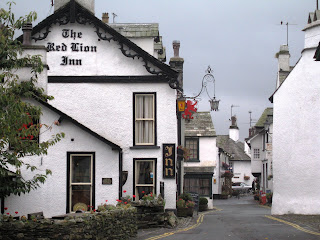 Wherever you go, good hiking shoes and rain gear are required as the weather can change in a moment, and trails usually have some wet areas. A good Ordinance Survey map will help, but there are many, many trails and not much signing so even with a good map, it’s easy to get lost. Just relax. A warm pub is never far way and fellow hikers are friendly and can provide assistance and directions.

New England in a Nutshell: Nantucket and Martha’s Vineyard Island Hopping Along the Coast of Croatia

Go Ahead — Give Up the Ship! And See Greece Like a Local

A Ramble in the English Countryside

Around Northern Italy by Train