Island Hopping Along the Coast of Croatia 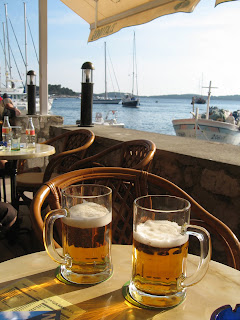 Many Americans were surprised in 2005 when Lonely Planet guidebook selected Croatia as the world’s number one dream vacation site. To geographically and historically challenged Americans, Croatia was a war zone, some far off Eastern European co 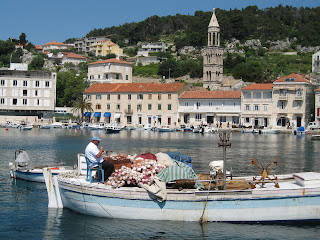 untry.
Even today four years later, when Croatia has become one of the hottest destinations for European travelers, there are still very few American visitors, other than those who see the country on day trip from cruise ships. Which is a shame, because Croatia is an amazingly beautiful, sophisticated — and cheap destination.
There are more than a 1,000 miles of spectacular, rocky shoreline dotted with beaches, red tile roof fishing villages and imposing fortresses. It is like the French or Italian Riviera in the 1960 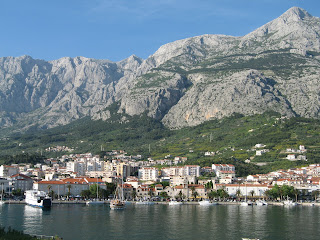 s — one of those rare places that actually lives up to its tourist office billing – “the Mediterranean as it used to be.”
On ten days of traveling through Croatia by ferry and car, we encountered no difficulties. Almost everyone in the tourism industry speaks English and every village and town has a multi-lingual tourism office to assist with rooms, maps and guides. Prices are about half what you would pay in nearby Italy. 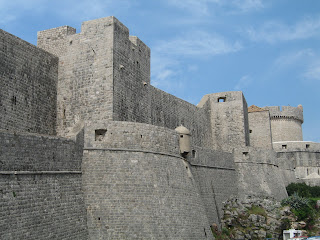 Some particulars: Croatia is the long, skinny country that is on the eastern side of the Adriatic Sea, directly across from Italy, which it resembles in climate and appearance. It is one of six new countries that came from what was formerly called Yugoslavia. The war has been over since 1995 and peace and tourism are flourishing.
There is an in-land portion of the country that includes the capital city of Zagreb, but it is the coast …and the fa 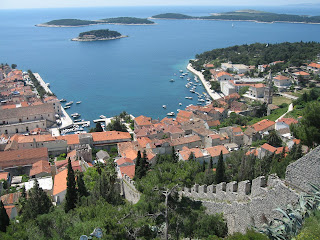 mous islands of Croatia…that are the main attraction. Croatia has 1,185 islands, all of them surrounded by beautiful Mediterranean blue sea. Sixty-six of the islands are inhabited and connected by a large fleet of ferries, making it possible to island hop up and down coast, staying each night on a different island.

Split is the largest city on the Croatian coast with direct flights to London and Paris and the natural starting point. It’s an industrial city of 170,000 people, unattractive around the airport, but the old town has a palm-lined harbor and Diocletian’s Palace, the most imposing Roman structure in the world and a Unesco World Heritage site.
Calling it a palace is a bit misleading since the site consists of more than 20 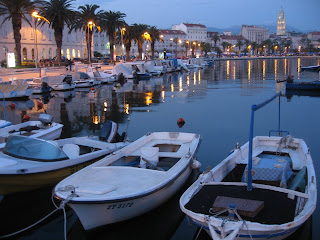 0 buildings and is still home to 3,000 people. Think more along the lines of a fortified Roman town contained within high walls. Built of white stone that resembles marble, it is maze of narr 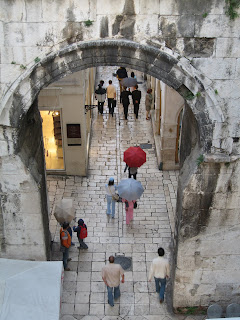 ow streets and alleys, lined with chic boutiques, galleries, restaurants and outdoor cafes. A number of museums tell the history of the palace, which dates to 245 AD, but it’s most fun to just wander through the alleys, turning a corner to find a plaza lined with Greek columns and an elegant café. It’s particularly magical at night when the marble sidewalks reflect the lights of the caf 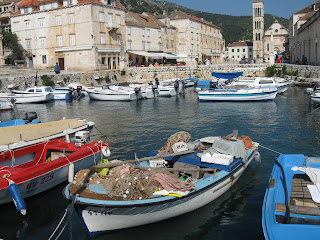 es and shops. Split is a major terminal for ferries with boats arriving and leaving almost hourly. Jadrolinija is the main ferry line and we caught their morning boat to Hvar Island, an hour and a half away.
Hvar bills itself as the greenest and sunniest of all Croatian islands. It’s certainly one of the most beautiful with high mountains falling down to the shore. Buses meet the ferry for a short trip to Hvar Town, a 13th Century walled village with traffic-free marble st 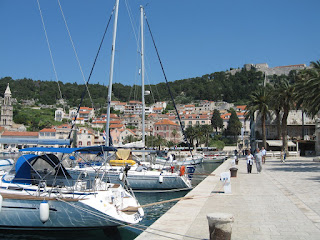 reets, dockside restaurants and a yacht harbor, all topped by a Napoleonic fortress looming over the bay. Residents meet the arriving buses and speak just enough English to offer rooms in their houses about $60, which is what we paid for a room with a bath and terrace overlooking the harbor. 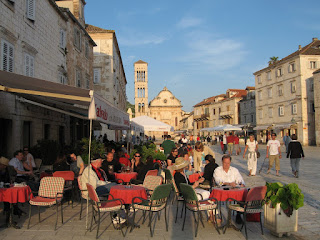 It’s a long climb to the fortress, but worth it for the view from the bar on top. There are paths along the shoreline for miles and the town has several small museums, but this is a resort area and just hanging out at the beach or in town is the most popular activity. The food along the coast in Croatia resembles Italy with pizza and spaghetti dishes, mixed with local seafood cooked in garlic and olive oil. Try the whole calamari, grilled in olive oil and served tableside in black pots, with a side of fries and a liter of excellent chilled local white 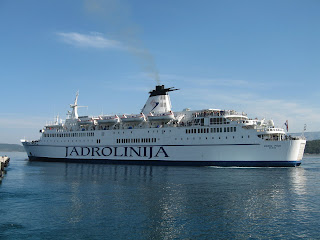 The next morning we caught the main inter-island ferry for a three-hour voyage to Korcula. The $10 ferry is like a small cruise ship with restaurants and many decks for viewing the constantly changing scenery of mountains and sea. In Croatia, you are never out of sight of a mountainous, rocky shoreline with terraced vineyards clinging to the hills.
Korcula first appears like a 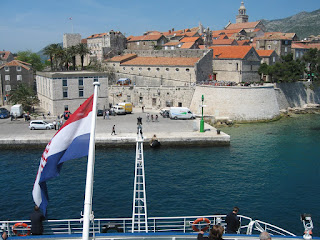 dream – a walled town ringed with palm trees and topped by a sea of red tile roofs. It’s a sleepy little place in the day as most people take water taxis to nearby beaches, stroll the miles of trails along the shore, or relax at one of a dozen outdoor cafes that form 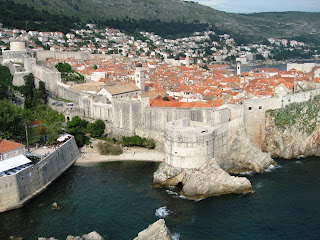 a line along the walls overlooking the bay.
The next day’s ferry continues on to Dubrovnik, the jewel of the Adriatic. This is one of the great walled cities of the world. The massive stone curtain surrounding the 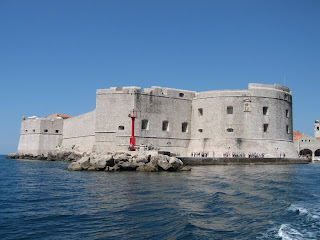 town rises as high as 82 feet and is more than 6,000 feet long. There are 10 semicircular bastions, two pocket fortresses and one outdoor bar guarding the flanks (the bar faces the sea and is entered through a sally port through the high walls). It’s possible to walk the entire way around on top of the walls that date 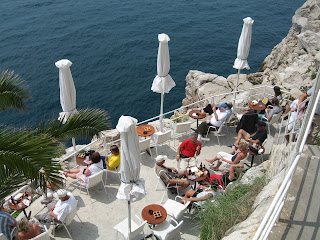 back to the 10th Century, but it’s no easy task and involves lots of stair climbing.
Below, the buildings within the walls date mostly to the late 1600s. The center of town is a wide, marble street, Placa, lined with outdoor cafes, bars and shops. Even though 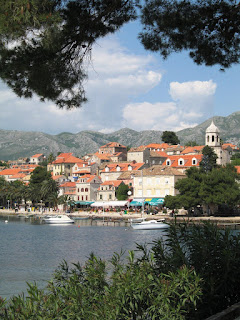 Dubrovnik is traffic free, when the cruise ships are in, the town can be maddeningly crowded. Better to avoid the mid-day crush by taking a water taxi across the bay to Cavtat, an attractive Mediterranean resort with an old stone harbor lined with rustling palm trees and outdoor cafes. It’s like an undiscovered Sain 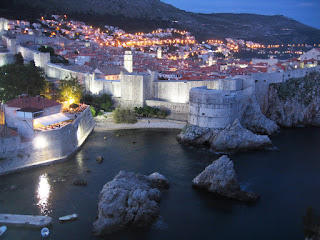 t Tropez. The calm waters in the bay mean that you can enjoy a relaxing waterside lunch with the sea practically lapping at your feet and return to Dubrovnik in mid-afternoon when the cruise ships move on.
At night, the marble streets glow with a sheen that makes it look like it h 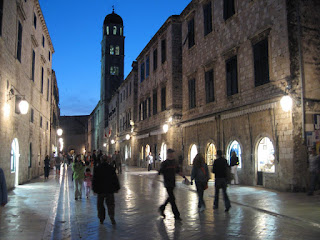 as just rained, while the walls are lit from dramatic angles. During the civil war in 1991-1992, Dubrovnik was hit by more than 2,000 shells and guided missiles, which damaged the roofs in 68% of the 824 historic buildings in old town. A war museum has fascinating photos from this time, while maps located throughout the city show the location of wher 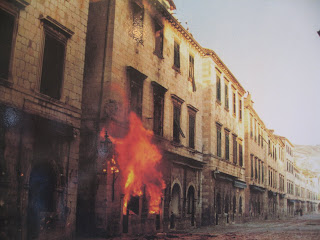 e every shell hit. All of the damage has been repaired, but it’s easy to spot the new roofs. It’s an amazing thing to see photos of the main street burning just 15 years ago, then step outside to see lines of people at the gelato stands.
From here, it’s a spectacular drive along the coast back to Split. As part of the p 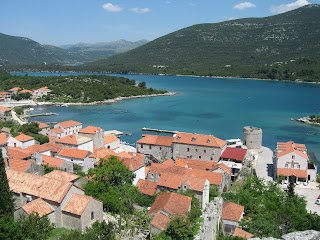 eace settlement, Bosnia obtained a 15 km stretch of the coast so you’ll have to drive through Bosnia, but tourists are waved right through.
A highlight along the coast are the tiny villages of Ston and Mali Ston, known for their oyster beds and more than a dozen seafood restaurants. The wall above town is 5 km long and was the longest fortifi 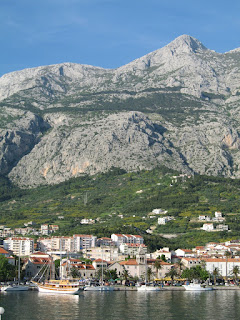 cation in Europe when it was built in 1333. Climb up to one of the towers, then relax with oysters and chips under the shade of a tree-lined café. There are a dozen seafood restaurants in the small town.
The so-called “Makarska Riviera” is a string of beach resort towns that are all rather unattractive along the highway, which is lined with high-rise housing. But head to the harbor and the towns become beautiful with beaches, palms, yachts and cafes, backed by high mountain vistas.
One last island that must be visited is located just two kilometers from the airport – the walled vi 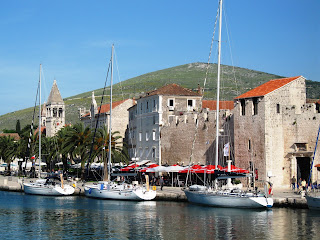 llage of Trogir. This too is a Unesco World Heritage site, a 15th Century town with twisting streets, hidden plazas, a medieval castle and a wide waterfront promenade, all squeezed on to a tiny pede 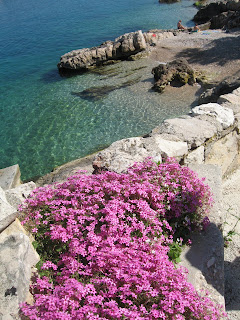 strian island. It’s the perfect place to relax, unwind, have an ice cold pivo and ignore the occasional jet carrying people back to reality.

IF YOU GO: Croatia has been discovered by Europe and is reportedly almost impossible in July and August. Restaurants in tiny Korcula stay open all night for crazy Italians who want to have dinner at 3 a.m. We traveled in mid-May and found the country nearly d 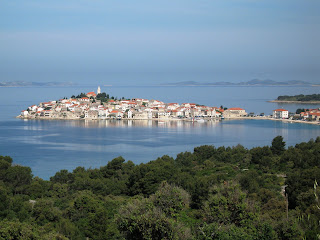 eserted, rooms available everywhere for about $50-60 a night. We traveled without a single reservation and found rooms in private houses either from the tourist office or from local residents meeting the ferries. Hotels are expensive. Temperatures were pleasant and in the high 70s in May, but it is too cold to swim until June. Seafood is excellent and pizzas are delicious and a bargain and every village has several gelato stands. Beer is cheap, but there is not much variety beyond European lagers. The red wines are top quality and run about $10 a bottle in stores. The best deal in restaurants is to order a liter or half liter of house wine served in a carafe. For information on Croatia.
http://www.croatia.hr/ is the official tourist office site.
http://www.hr/wwwhr/tour/index.en.html had more than a dozen links for specific information on Croatia.
http://www.jadrolinija.hr/default.aspx?lang=2 offers the Jadrolinija ferry schedules. You need to plan ferries carefully in the off-season because there is not daily service to all islands and you can get stuck on an island for several days.

Go Ahead — Give Up the Ship! And See Greece Like a Local

A Ramble in the English Countryside

Around Northern Italy by Train