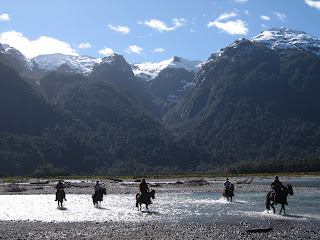 It’s not easy to go east from Chile.

A string bean of a nation, Chile stretches 2,580 miles from north to south, but averages only 110 miles in width. It’s like taking a land mass slightly larger than Texas and rolling it into a thin pencil that is twice as long as California.

Running down the entire eastern side of Chile and separating it from Bolivia and Argentina are the great Andes Mountains – the longest mountain range in the world. There are only 42 passes over the mountains from Chile to Argentina, but perhaps the most spectacular is called the Cruce de Lagos – the “Cruise of the Lakes.” 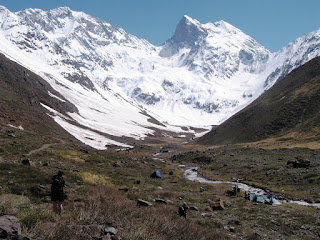 About 175,000 people take this spectacular lake passage through the Ande 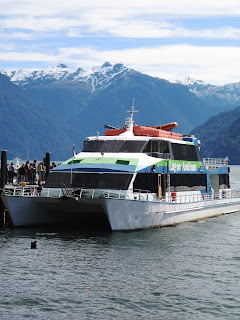 s Mountains every year. It is the mountain route that Che Guevara takes in the movie Motorcycle Diaries.

Today, the full-day tourist excursion requires taking four buses and three ferries as you alternate between bus rides up jagged mountain passes and ferryboat cruises across the chain of three fiord-like lakes, each one ringed with volcanoes and tumbling waterfalls.

Located 650 miles south of Santiago, the area is called Chile’s Lake District and with its lush green valleys and sawtooth mountain 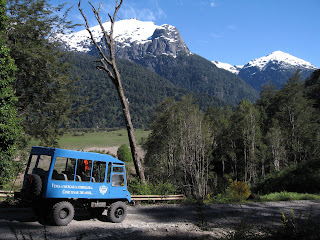 s it looks like the German or Swiss Alps. It can sound that way too, since many of the original settlers were from Germany. They still speak the language and even have their own local German radio stations.

For hundreds of years, the lake passage was used as a way across the Andes by the Huilliches, the native people of Southern Chile. Later, the Jesuits of Chiloe used this passage when they founded missions in the area. 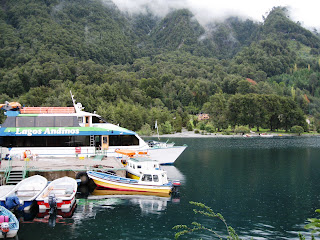 In the early 1900s, a young Swiss explorer named Ricardo Roth recognized the scenic beauty of the lakes passage and began operating tourist excursions. At that time, it was necessary to row across one of the lakes and a one-way journey could take days. Today, descendents of the Roth family run a modern operation that uses sleek catam 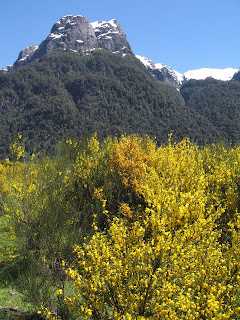 aran ferries and a fleet of colorful blue buses to complete the 117-mile journey between Puerto Mott, Chile, and the ski resort of Bariochie, Argentina, in a leisurely 8 hours.

While this is one of the most scenic routes in South America, most people take it to see the views a 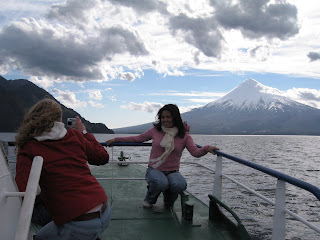 nd experience the Andes, some stopping like we did to spend three days in the middle of the trip in the ecological village of Peulla (population 120), the center of Parque Nacional Vicente Perez Rosales, Chile’s first national park.

Peulla has an end-of-the-world feel to it, and with good reason. It’s not the easiest place to get to. From the west, there is only one way in — a 20-mile boa 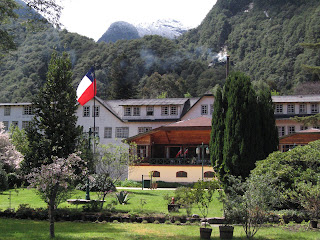 t trip across Lago Todos Los Santos (All Saints), regarded as the prettiest of the lakes in the region. The sheer mountains and cliffs lining the lake prohibit building any road.

It takes two hours to sail the lake and the scenery never stops. In one direction, there are sweeping views of the Volcano Osorno, which Charles Darwin watched erupt from the decks of the Beagle in 1835. Looking the other way, you get a glimpse of towering Volcano Tronador, at 11,450 feet, the highest peak in the area. 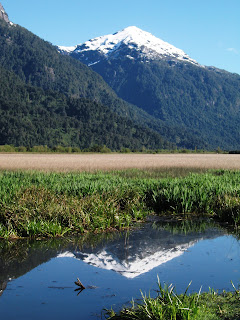 Arriving at the Peulla ferry dock, it’s a half-mile walk to the two lodges located here. Because this is the center of 970 square mile Vincent Perez Rosales National Park, development is limited. The 71-room, historic Hotel Peulla was built in 1890 and has a German Alps feel to it. 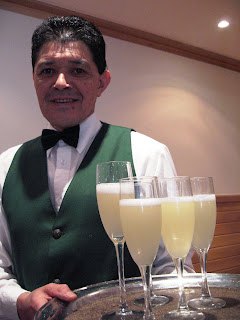 Hallways and some of the public rooms can be a bit bleak, but there are pretty gardens surrounding the hotel and a lovely view from the bar’s outdoor deck, where you can sit, look at mountains and hear the ever-present roar of a nearby waterfall. This region receives 260 days of rain a year and because of the steepness of the mountains and the quietness of this remote region, you are always in hearing distance of a cascading waterfall.

And for drinks on the deck? Well, as you’d suspect, Chile’s beer is good German lager with Cerveza Cristal and Escudo being the two main brands. Kuntsmann 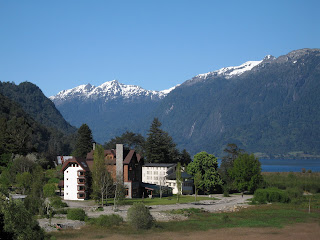 also has a decent lager as well as a bock beer. But the drink of choice in Chile is the Pisco Sour, the national cocktail containing Pisco (a regional brandy), lemon or lime juice, egg whites, simple syrup and regional bitters. You wouldn’t want to have a half dozen of these and in the tulip shaped glass it’s a bit too refined for outdoor decks, but it’s tasty enough for a pre-dinner c 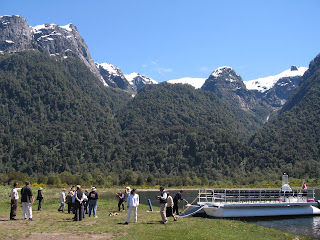 Next door to the Hotel Peulla, the same owners have opened Hotel Natura, a more upscale, 45-room, four-star hotel. The rooms feature natural native woods and have cable television and Internet connections, while the lobby has a roaring wood fireplace and two floor-to-ceiling windows overlooking the And 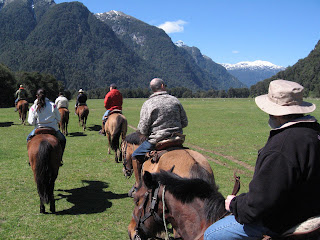 es. The four-star dining room offers Chilean steaks and seafood with a good local wine selection, but the meals are heavy and the lunch and dinner menu are the same with no daily specials. After two days, you’ll be heading for the sandwiches served in the Hotel Peulla bar.

A tour operator, Aventura en Peulla, offers a series of day adventures, from a safari in a 4×4 vehicle up into the mountains to the Argentina border, lake and river cruises to horseback riding and sailing. Packages can be purchased that include the ferry, hotel, meals and your choice of 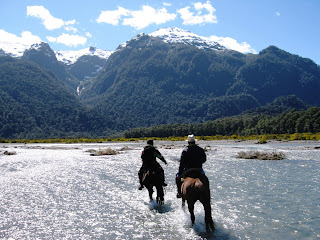 The horseback riding is spectacular. They dress you in knee length half chaps that give everyone a dashing gaucho-like appearance as you splash your trail horses across the shallow Rio Negro to the foot of the Andes. Overhead, condors and kingfishers circle in the sky, while the distant roar of a waterfall drifts down on a breeze from the high, snowcapped crags abov 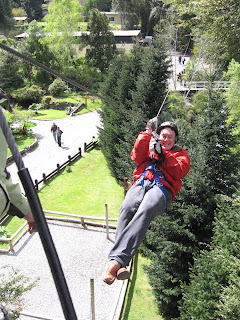 They also have an 11-station canopy experience that crosses streams and ravines and is, of course, terrifying. But if you can take your mind off the fact that you are flying at outrageous speeds on a wire a hundred feet above the ground, the scenery will take away what little, if any, breath you have left. 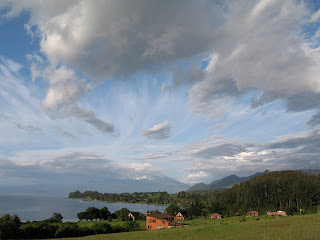 F YOU GO:
The Lake District is popular recreation destination for both international tourists and the Chilean people and offers a milder Andes Mountain alternative to Patagonia. The climate is similar to the American Northwest, and you should b 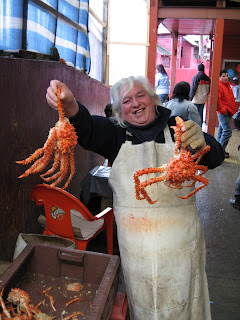 e prepared for rainfall. The best time to visit is October to March. The airport in Puerto Mott has regular daily 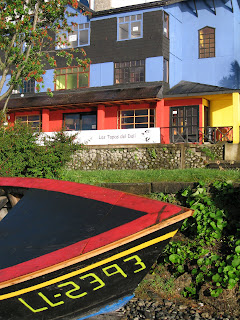 connections to Santiago. Puerto Mott is a rugged fishing town with an Alaskan feel. This is only natural since it marks the southern end of the Pan American Highway, the Southern Hemisphere version of Prudo Bay, Alaska where the highway begins 16,000 miles to the north. Puerto Mott is best known for its fish market and seafood restaurants. A more comfortable tourist base is Puerto Varas, 12 miles north on the shores of Lago Llanquihue. Puerto Varas has nice shops and restaurants, colorfully painted homes and (amazing in such a remote 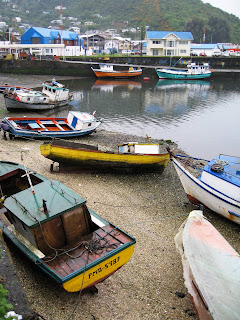 location) a modern casino. The casino is an attempt by the Chilean government to increase tourism to the region. The Cruce de Lagos excursion leaves from either town. Most people will spend a day or two on th 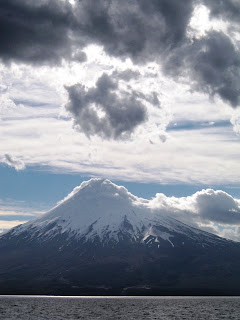 e way in Santiago. Bellavista is a fun neighborhood filled with dozens of bars, cafes and nightclubs, many with live music.
Cruce de Lagos: TurisTour offers day trips to Peulla, overnight trips to Peulla and a variety of other packages with food and recreation adventure options included. http://www.turismopeulla.cl/ Rooms at the Hotel Peulla: http://www.hotelpeulla.cl/ The full Cruce de Lagos crossing to Argentina runs year-round with more options and times available during heavy season, September through April (the Chilean summer). For information, visit: http://www.crucedelagos.cl/. For hiking, rafting, kayaking, technical climbing and other adventures in the Lake District, visit: http://www.lagosyvolcanes.com/