Drinking Kalik with the Real Pirates of the Caribbean 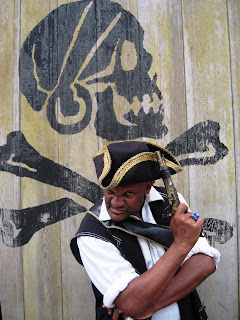 “Are ye a pirate, sir? Well then, sign aboard,” says Joseph Garvey, brandishing a flintlock pistol as he beckons visitors into the Pirates of Nassau Museum. Called “the best pirate attraction in the world” by British pirate historian David Cordingly, (there can’t be much competition) the museum in downtown Nassau, Bahamas blends some corny Disney-like effects with enough real history to offer a fun look at 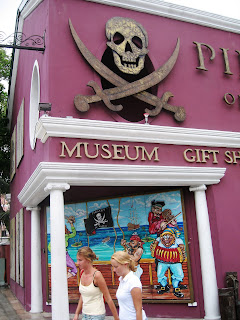 the pirates who ruled the waters of the Bahamas nearly 300 years ago.
It’s quite a story too. During the “Golden Age of Piracy (1715-1725),” Nassau was the undisputed pirate capital – the center of an actual Pirate Republic that terrorized the Americas and even challenged the European powers of Britain, France and Spain. At a time when the world was ruled by kings, pirates had a democracy and elected their own captains and officers. Runaway slaves were treated as equals and nearly a quarter of the cr 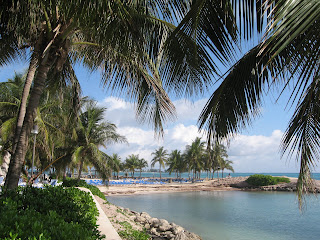 ew on some pirate ships were black. Pirates had their own laws and courts and even offered the first naval disability program to anyone injured in battle. But the real allure was best summed up by pirate Captain “Black Bart” Roberts, who said of pirating, “It was a short life and a merry one.”
The blo 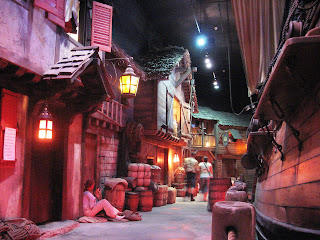 ck-long Pirates of Nassau museum puts you onto a moonlit dock lined on one side by taverns and pubs and on the other by a reproduction of the 130-foot-long, 16-gun corvette, The Revenge. It’s like walking (instead of floating) through Disney’s Pirates of the Caribbean ride, but not as much fun.
The museum is better when it concentrates on the real story of the pirates, from Edward Teac 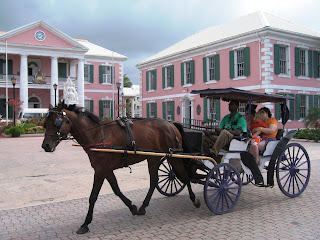 h, the infamous Blackbeard, who put smoking fuses in his beard to make him appear as a demon from hell, to Howell Davis, who “died like a game cock,” killing two men before he fell.
A diorama is created for the flamboyantly dressed “Calico Jack” Rackham, who was probably the pirate closest to Johnny Depp’s Captain Jack Sparrow.
While in Nassau, Calico Jack fell in love with Anne Bonney, convinced her to leave her husband, don men’s clothes, steal the sloop Sweet William and begin a life of piracy.
Incredibly, once at sea, Anne fell in love with a fellow shipmate, o 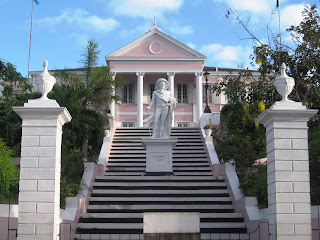 nly to discover that this pirate was also a woman dressed as a man – the adventuress Mary Read. The three sailed together as pirates until they were surprised by a British ship off the coast of Jamaica. Calico Jack and most of the crew were drunk and hid in the ship’s hold. Only Mary Read and Anne Bonney offered any resistance, fighting like hellcats with pistol and cutlass. 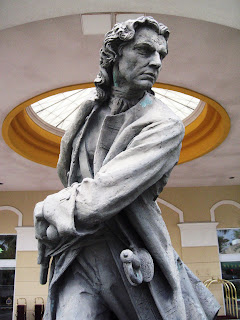 The ship was taken and all three sentenced to hang. As Calico Jack went to the gallows, Anne told him, “Had you fought like a man, you need not have been hanged like a dog.” Anne and Mary both conveniently got pregnant in jail and escaped the hangman.
But many other pirates didn’t. Tired of the pirate nuisance, England sent Woodes Rodgers (a former pirate himself) to Nassau in 1718 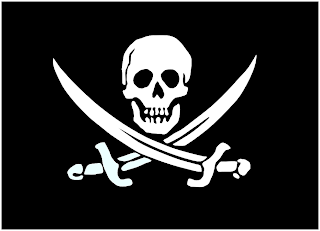 with three warships and an ultimatum for the pirates to choose: “Death or pardon.” In short order, Rodgers cleaned up the pirate den. He described his actions as: “Expulsis Piratis – Restituta Commercia,” words that still adorn the official seal of the Bahamas – “Pirates Expelled – Commerce Restored.”
Ironically, it’s the pirates who have remained heroes. You can’t throw a cutlass in Nassau without hitting a shop selling sk 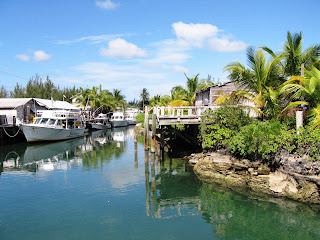 ull & crossbones t-shirts or “Got Grog?” bumper stickers, while the only tribute to Rodgers is a small statue of him reaching for a brace of pistols, located in front of the British Colonial Hilton Hotel. He looks angry.
The museum tour ends with a display of Jolly Roger flags. Each pirate captain had his own flag design, many featuring an hourglass that symbolized life was short. Calico Jack’s flag of crossed sabers beneath a skull is one of the most famous, and fittingly, the one used on the Black Pearl in the Disney Pirates of the Caribbean movies. 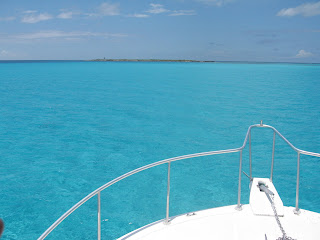 rn Day Pirate Adventures
As you would expect from a country that mentions pirates in its official seal, Nassau offers lots of pirate-like adventures.
“Walking the plank” into shark infested waters is a staple of every pirate movie. Unfortunately, it never happened and there’s no evidence of pirates ever making anyone do it. But don’t let that stop you. At Stuart’s Cove, y 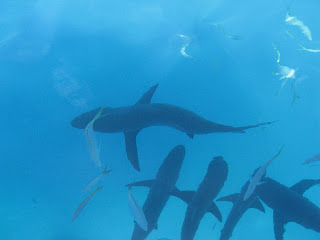 ou can go snorkeling with sharks. There’s no plank and you walk down stairs off the back of a boat into crystal clear water. But there are sharks — about a dozen of them, circling in the water just a few feet beneath you.
“Keep 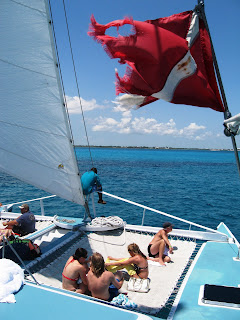 your hands at your side because the sharks here are used to being fed by hand,” the captain tells you. After fifteen terrorizing minutes of keeping your hands frozen at your sides with shark fins just beneath you, you climb back on board and the captain whips the sharks into a frenzy, feeding them, as he has promised, off the back of the boat by hand.
Pirates did maroon prisoners and mutineers on deserted islands and you can experience that too on cruises aboard the Flying Cloud. The catamaran sails twice daily to Rose 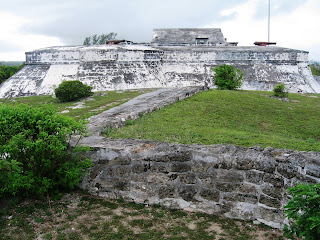 Island, a picture-perfect deserted cay of palms and white sand. Passengers who want to be “marooned,” are dropped here, while the boat goes off on a snorkeling excursion, picking them up later in the day.
Pirates lived in a world of wooden ships and almost 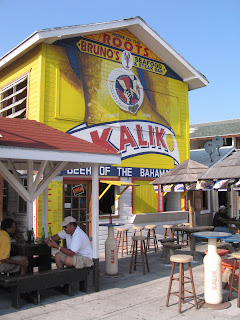 nothing has survived except, fittingly, some old rum bottles, swords and cannons. However, there are three stone forts in Nassau, and while all of them were built after the pirates, they still offer a glimpse of the era. Fort Charlotte built in 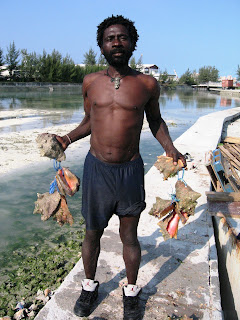 1789 is the largest and its towering walls and black cannon today stand guard over an area of Nassau known as “Fish Fry.” This is a row of a dozen local seafood restaurants – and the best place to eat like a pirate.
The meal of choice is conch…a snail-like, beautiful pink shell fish that tastes like a rubbery scallop and can be grilled, fried or served cold in a conch salad with green 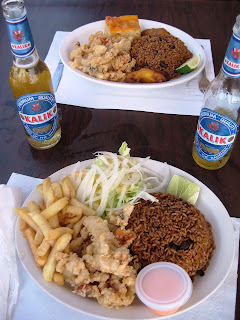 pepper, tomato and onion, cured in lemon juice. “Cracked conch” (conch fried in a light batter) with “peas and rice,” (rice and small beans) and fried plantains (small banana-like fruit), washed down with the very drinkable local beer, Kalik, is the national dish. Kalik is brewed on the Bahamas and the name is supposed to come from the noise cow bells 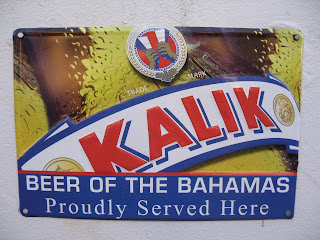 make. Well, why not? Even better, stop in any liquor store for a traditional black bottle of Caribbean-brewed Guinness. Maybe it was the beach, but it tasted better than our own Canadian-brewed Guinness.
Lonely Planet will tell 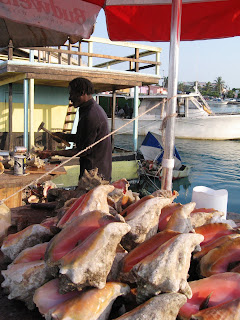 you to not eat conch because it is near endangered status and it is quietly being fished out in the Bahamas. Conch from the Bahamas has already been banned in the U.S. and many other Caribbean islands. But as a pirate, how could you not tast 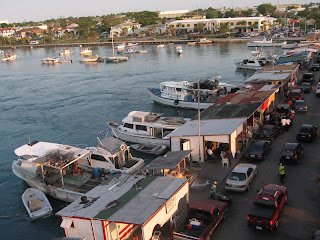 e the national dish? Conch is an important part of the Bahamian diet and a major source of their protein. It’s also delicious.
You can also try fresh conch at the seafood restaurants under the bridge to Paradise Island. Here, fishing boats actually dock behind the restaurant and you can watch your conch prepared, from being ripped live from the shell to cut up for conch salad. As one restaurant says, “If you want it any fresher, go and catch it yourself.” 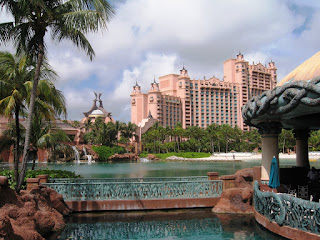 Finish the meal off with a fine Cuban cigar – legal and cheap in Nassau, but of course illegal to bring home to the U.S..
Across the bay is Paradise Island, called Hog Island in pirate days. It was Paradise Island that made Nassau such an 18th century sailing haven because it created a deep water, sheltered harbor. Today, the largest cruise ship port in the Caribbean is located he 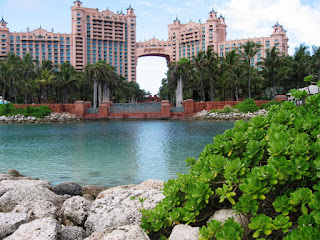 re. Paradise Island was once owned by 20th century pirate Donald Trump. Today it is home to Atlantis – one of the most outrageous (and expensive) hotels in the world.
As a pirate, you can explore the casino, aquariums, restaurants, architecture and nightlife of Atlantis for free o 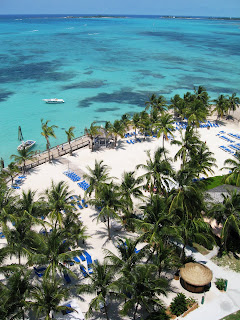 n day trips. You have to pay to use the pools during the day, but if just want to see them, act like a pirate…mill around by the entrance areas and you should be able to slip through. We did it, Jack Sparrow style, by walkin 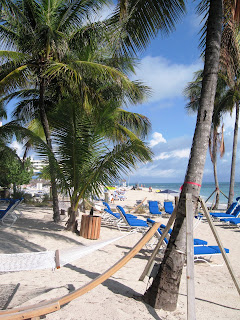 g backwards past the guard.
It’s cheaper, quieter and more laid back to stay in the palm-lined Cable Beach area. You can travel from Nassau to Paradise Island as the pirates did, on a ferryboat, for just $3 each way.
The white sands, sheltered blue waters and palms of Cable Beach are only a 10-minute, $1 bus ride from Nassau, on the local jitney bus #10. Buses in Nassau are privately owned and are as 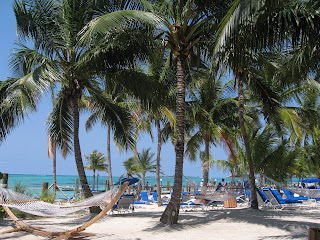 close to the pirates of old as you’ll find. Each bus driver is his own captain, decorating the bus as he or she likes, stopping wherever they want and playing their own mixture of reggae, goombay (the distinctive music of the Bahamas) or calypso music.
On one bus we rode, the driver had rigged up a DVD player on the windshield and was actually wa 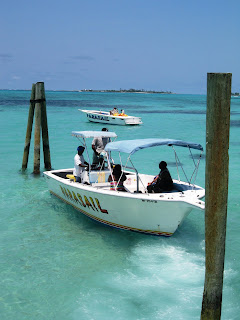 tching a movie as he drove in the chaotic traffic. The movie? Why, a pirated copy of Spiderman 3, of course.

IF YOU GO: Nassau is located on the 21-mile long island of New Providence, in the Commonwealth of the Bahamas, about 200 miles east of Florida. With a population of 212,000, Nassau is the capital and largest city of this independent country, which broke from England in 1973, ending 325 years of British rule. However, as part of the Commonwealth, Queen Elizabeth still 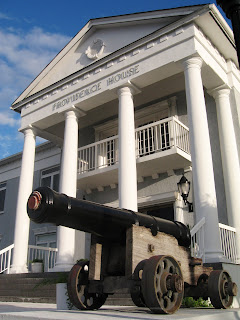 appears on the money and stamps. Paradise Island is a quarter-mile north and can be reached in the day by ferry for $3 each way from Prince George Wharf, or on foot or by taxi over a bridge.
What to Read: The Pirate Republic, Being the True and Surprising Story of the Caribbean Pirates and the Man Who Brought Them Down by Colin Woodard is the best account of the pirates of Nassau. On the beach, try Ian Fleming’s Thunderball. Although the book is more than 50 years old, Fleming pl 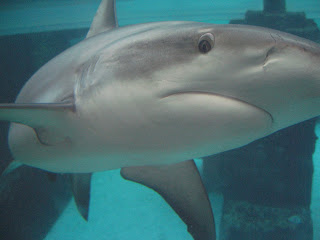 aced this James Bond thriller about modern day pirates in Nassau and the descriptions of the island hold up well. The movie (and the new Bond movie, Casino Royal) were filmed here. Sean Connery lives on the west end of New Providence.
Adventures: Snorkeling with the sharks is a four-hour adventure that includes snorkeling over a plane sunk for Jaws 4 and costs $55. http://www.snorkelbahamas.com/. A half-day sail on the Flying Cloud is $60 and includes a rum punch. http://www.flyingcloud.info/. Pirates of Nassau Museum costs $12 for adults.
http://www.pirates-of-nassau.com/. For information on the Bahamas, visit: http://www.bahamas.com/.

Cruising With the Real Pirates of the Caribbean

Traveling With Mark Twain in Hawaii