Biking ‘Round the San Francisco Bay 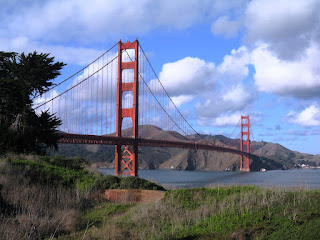 One of the most spectacular urban bike rides in the nation is also one of the easiest.
In just a couple of hours of relaxed peddling, it’s possible to bike around San Francisco Bay, cross the famous Golden Gate Bridge, visit an old sailing ship, scale the ramparts of a Civil War fort, ride by marinas with million dollar yachts, have lunch at a seaside outdoor café in the Mediterranean-style village of Sausalito, and return to the city by ferry at sunset.
Getting a bike is no p 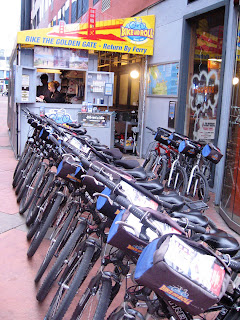 roblem. Two competing companies, Bike and Roll (http://www.bikeandroll.com/androll.com/) and Blazing Saddles (http://www.blazingsaddles.com/), have several locations in the Fisherman’s Wharf area. Rental rates are $7-$8 an hour, or $27 for a full day. The bikes come with an easy lock, basket, flat repair tools, helmet and maps. They are heavy, sturdy, comfort bikes, perfect for the mostly flat terrain.
Most of the 8-mile trip to Sausalito is on 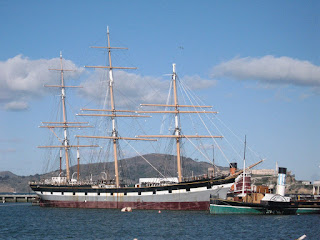 off-street bike paths, but in the beginning, you’ll have to leave the rental locations and join the heavy Fisherman’s Wharf street traffic, dodging trolleys, pedestrians and cars as you make your way along the touristy waterfront toward the big three-masted sailing ship at the end of Hyde Street Pi 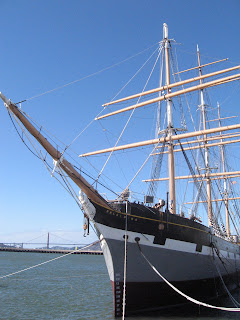 er.
The pier served as an auto ferry dock until the Golden Gate Bridge opened in 1937. Today, it is the San Francisco Maritime National Historical Park. The old dock is lined with a variety of sailing craft including the square-rigged Balclutha, a Scottish-built, 256-foot-long sailing ship that rounded Cape Horn 17 times. The iron-hulled, square- rigger carried grain and lumber to California and even had a staring role in the 1935 film version of Mutiny on the Bounty.
A museum across the street tells the story of the founding of San Francisco – perhaps the craziest place anyone has ever built a city. Forgot the fact that it’s on a geological fault and built on seven horrendously steep hills. When it was founded, there was also no fresh 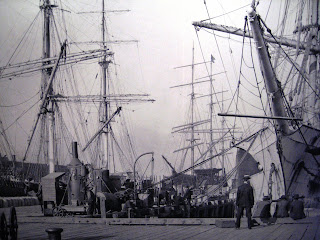 water and no timber on this exposed, windy peninsula that was often covered in fog.
But there was a well-protected port and when gold was discovered in California in 1849, the world rushed here, 750 boats arriving in the first year alone. By the 1870s, San Francisco’s docks were loaded with sailing ships like the Balclutha, carrying cargos to ports around the world.
Back on the bike, you leave the streets and enter a paved path along the water’s edge to Fort Mason, an army pos 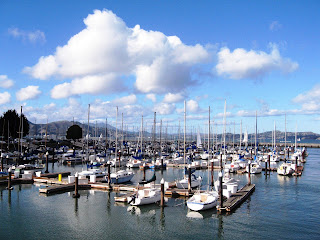 t that dates back to the Civil War and is now the headquarters for Golden Gate National Recreation Area. There’s an information center here and a steep hill to climb before you descend back to Marina Boulevard, with its bobbing boats and magnificent views of the bay.
A long, flat, paved bike trail continues along the water’s edge, passing through Crissy Field. This area was once dunes and tidal m 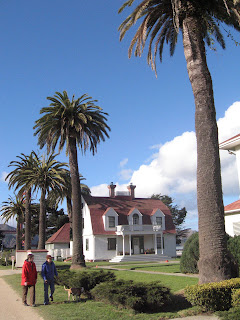 arshes; today it is part of a national recreation area and a great place for bird watching. You can see more than 200 species landing here, everything from Snow Egrets to Red-shouldered Hawks.
There are two information centers along the trail that have exhibits on Crissy Field’s important role in aviation. The army built a pioneer airfield here in 1919 to advance and test the military po 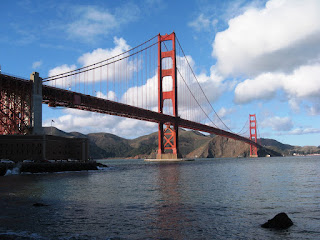 tential of airplanes. The First Transcontinental Endurance Test took off from this airstrip in 1919 with 61 planes trying to fly across the country. Only nine of the aircraft made it and nine pilots were killed in the attempt, one of them Major Dana Crissy, for whom the airfield was named.
The bike path continues along the bay with each turn offering more spectacular views of the bridge and the Marin headlands until the water-level trail finally ends beside a large, three-tiered brick fortress called Fort Point. Built in 1861 during the Civil War, the fort onc 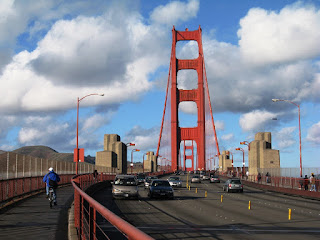 e boasted 126 cannon. None of them were ever fired and the fort was abandoned in 1900. Today, it is run by the National Park Service and offers Civil War exhibits 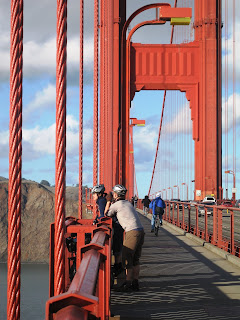 and a chance to run up and down the stairways to the three levels of ramparts, all offering great views from the former gunports.
The fort has been used in many films and is perhaps most famous as the spot where Kim Novak jumped into the bay and was saved by Jimmy Stewart in Alfred Hitchcock’s Vertigo.
From the fort, there’s a steep climb on a road shared with cars (but with a safe bike lane) to the large parking lot beside the bridge. At two miles long with a span of 4,200 feet, the Golden Gate Bridge was the longest suspension bridge in the world when it opened in 1937. The 746-foot high suspension towers were the tallest man-made structures west of New York.
Workers began painting the bridge 70 years ago and have never stopped. A team of 25 painters work continuously, painting it 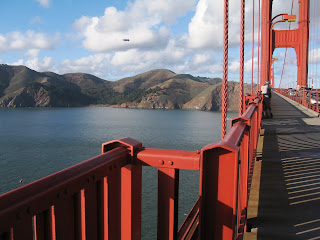 with 1,000 gallons of International Orange every week. As soon as they “finish” painting the bridge, they start all over again.
The bike trail picks up from the parking lots and travels under the bridge to the west side. There are two paths across the bridge: the east side is for pedestrians and offers view of San Francisco; the west side is for cyclists and has sweeping views of the rocky cliffs of th 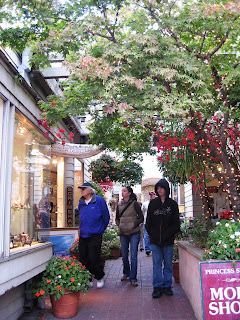 e Marin headlands and the Pacific.
You can expect high winds on the bridge and the bike trail is narrow, with a steady stream of cars seemingly coming directly at you. Fortunately, there are many pull- offs where you can relax and enjoy the view. But don’t relax too much. The bridge is the favorite suicide spot in San Francisco. People who keep track of it recorded the one thousandth jumper in 1995. Amazingly, some people have survived the 220-foot plunge.
At the end of the bridge, you must join the road for the descent into Sausalito, but there are few cars and the wi 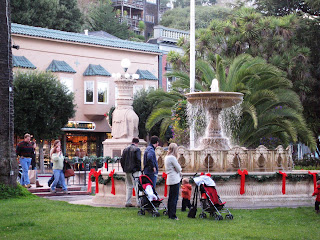 nding road is almost all down hill, twisting and turning with a different view in every direction.
Sausalito feels like an Italian town on the Mediterranean. There are bike racks on every corner, so lock up the bike and explore. Princess Street is lined with art galleries and flowers. The Scrimshaw Gallery is worth a stop for its nautical prints. If you want to do a pi 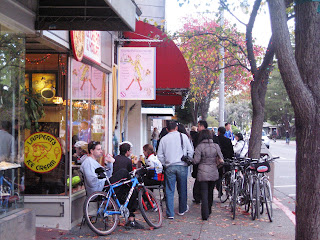 cnic lunch by the water, the Venice Gourmet Delicatessen has been family owned since 1964 and has great sandwiches and drinks, directly across the street from the best view of the bay.
Scoma’s Sausalito has offered the most famous seafood lunch spot for 35 years, but you can also grab an Anchor Steam with a view of Alcatraz and San Francisco at Horizons or The Spinnaker. 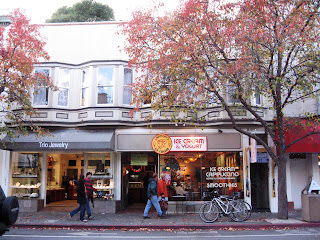 Most bikers just stop at Lappert’s Ice Cream (http://www.lapperts.com/) an institution in the area, before poking in the galleries and souvenir shops along Bridgeway Street.
The bike path continues through town, offering more ambitious bikers the chance to continue to Tiburon (another 8 miles) or on a mostly uphill route shared with cars to the famous Muir Woods Na 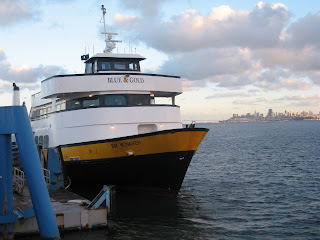 tional Monument, 10 miles away.
But the most popular choice is to hop on the Blue & Gold Fleet (http://www.blueandgoldfleet.com/) for a 20-minute, $9 ferry ride across the bay, back to Pier 39 in the 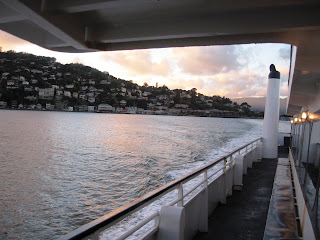 heart of Fisherman’s Wharf. Each ferry can carry hundreds of bikes back, especially in the winter when the 4:30 p.m. departure offers a chance to cross the bay just as the sun sets behind Golden Gate Bridge. With sailboats flying 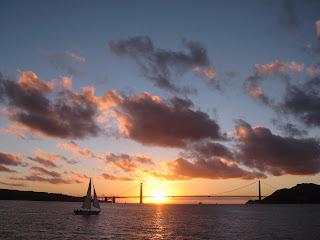 by, Alcatraz off the port bow and all of the lights of San Francisco glimmering ahead, it’s a wonderful end to a day of biking on the bay.
You may not want a beer while biking, but back at Fisherman’s 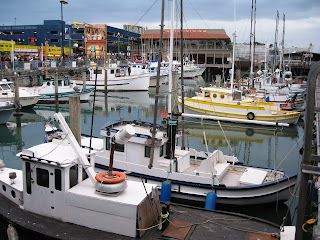 Wharf, you can grab a crab cocktail and Sierra Nevada or Anchor Steam (legal to drink on the street if you pour it in a plastic cup) and enjoy a walk among the seagulls, seals and sightseers.

IF YOU GO: For San Francisco information, http://www.onlyinsanfrancisco.com/
For Sausalito, http://www.sausalito.org/