Walking and Drinking Beer in Williamsburg


One of the greatest walks in America is an early morning stroll down the Duke of Gloucester Street in Williamsburg, Virginia.  By noon, DOG Street (as the locals call it) will be swarming with tourists and shoppers, but if you come early in the day, you can have this time portal to Colonial Virginia all to yourself. Franklin Delano Roosevelt called it the most historic avenue in America. George Washington and Thomas Jefferson knew the street well, and would feel right at home today, walking along its brick sidewalks past familiar white taverns with swinging pub signs.

DOG Street stretches for a mile, from the first Capitol building in Virginia built in 1701 to the College of William and Mary, the second oldest college in the U.S. after Harvard. Along the way, there are 88 buildings that are more than 250 years old.  Another 400 buildings have been re-constructed to their original colonial designs, creating a full-scale city that is frozen in time.  In Williamsburg, it is always the 1770s, a period when this was the capital of Virginia and the wealthiest and most beautiful British outpost in the New World. 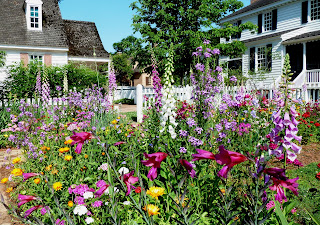 But make no mistake, Williamsburg is not a fenced off historic theme park.  This is a living and working town.  Cars are not allowed in the historic center, where all the streets are dirt, but many normal residents live in the historic zone and anyone is free to walk around the village any time they like.  On your early morning stroll you might share the street with local joggers and moms pushing babies or you might have to pause to let a horse-drawn carriage pass by.  If a backyard garden looks inviting, push open the white picket fence gate and walk on in.  None of the streets or gardens is off limits, and you are free to wander anywhere you like.

More than 90 artisans and living history educators work in the town as craftsman —  silversmiths, printers, cabinetmakers, bakers, bricklayers and shopkeepers.   They make Williamsburg the largest living history museum on earth.  On your early morning walk you’ll encounter many of these 18th century commuters heading to work — women in long skirts and straw hats, or gentlemen in knee breeches and stockings, who tip their tri-corner hat and offer a pleasant, “Good day to you sir.” 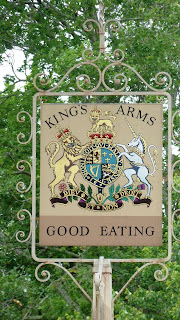 Feeling hungry?  Stop by the bakery behind the Raleigh Tavern for a fresh gingerbread snap and a cup of tea.  But, if you talk to the shopkeeper, you’ll soon learn, tea in 1770s Williamsburg comes with a price.  While the streets and gardens appear to be peaceful, Williamsburg in 1770 is actually sitting on a powder keg — a town of diverse people, struggling to get along.  Revolution is in the air.  The atmosphere in Williamsburg makes today’s red and blue states seem quite calm.  People are outraged at a new tax on tea.  While the Royal Governor lives in an opulent palace at one end of the street, half of the town’s 5,000 residents are enslaved African Americans living in poverty.  As you walk along, you will share the brick sidewalks with tradesmen, Native Americans, indentured servants, farmers, soldiers, slaves, rebels and loyalists…all with different stories they are eager to tell you.

Williamsburg, of course, is not an actual re-creation of what an 18th Century town looked like.  In 1770, Williamsburg had no trees, the streets were muddy and filthy, and it’s hard to imagine the smells of people who rarely bathed or changed clothes.  If you want to see the 18th Century, travel to India.  But neither is this a Disney-like theme park.  Rather than a re-creation, Williamsburg is more a celebration of 18th Century ideas and craftsmanship, especially those ideas that led to radical new views of freedom and liberty.   And they serve beer…. at four of the most beautiful pubs and taverns you can imagine.

Many people know Williamsburg from visits there when they were growing up, but it is definitely worth a repeat visit as an adult.

How Williamsburg Was Frozen in Time

From 1699 to 1780, Williamsburg was the capital of Virginia and one of the most important cities in all the 13 original colonies.  But at the height of the Revolutionary War, fearing a British invasion, the capital was moved to a more defensible and central location in Richmond.  This made Williamsburg a backwater, and for the next 150 years, it reverted to a sleepy college town of little importance.

As modernization crept in, a local minister, the Rev. W.A.R. Goodwin, began to fear that historic buildings once known to Washington and Jefferson would be torn down in the name of progress. So in 1926, he convinced John D. Rockefeller Jr., one of the richest men in the world, that Williamsburg was worth saving.  Rockefeller embraced the project, and over the next 30 years, he literally purchased much of the town and hired a team of architects, archeologists and historians to preserve, restore and rebuild Williamsburg to its colonial glory. 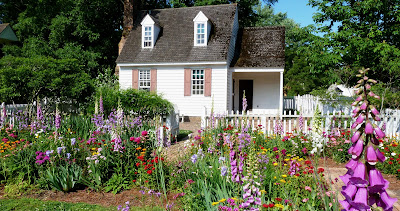 Today, the 301-acre colonial district is part museum and part living city.  The historic center is operated by the Colonial Williamsburg Foundation.  Although you can walk around the town for free, you need to purchase a pass from the Foundation to enter the buildings and participate in many of the programs.

The pass allows you to enter 225 period rooms, from the grand Governor’s Palace, the most elegant abode in the colonies, to the Public Goal, where 15 members of Blackbeard’s pirate crew were once jailed.  You can tour the Capitol, where in 1776 Virginia delegates voted for independence from England two months before the other 12 colonies did so in Philadelphia, or you can enter a colonial hospital and talk to a doctor to hear about the latest medical practices, like putting blood-sucking leeches on a patient to “bleed” them back to good health.

In the buildings, and in three world-class museums, there are more than 60,000 colonial items to view, including famous period paintings, clothing, furniture, and weapons.

But most important, the pass allows you to interact with the town’s craftsmen, who are busy about their daily life in shops, the same way they would have been 250 years ago.  Printers are setting type to produce a newspaper, soldiers are standing guard at the Magazine, silversmiths are hammering out jewelry, while gunsmiths work on decorating their long rifles.

In the shops along DOG Street, you will meet craftsmen who make everything from bricks and barrels to hats and wigs, the same way they did centuries ago.  And you’ll hear about their troubles and the fear that the colonies are about to go to war with England.

But Williamsburg is a living city too.  With or without the pass, you can wander the pretty streets and back alleys or stroll through the 26 elaborate gardens overflowing with flowers, all authentically researched to have been in the colonies in 1770.    It’s also free to poke around the dozens of shops in town selling some tourist stuff, but an amazing amount of authentic colonial items, from brass candlesticks to birdhouses, 18th Century china to silver rings and bracelets. 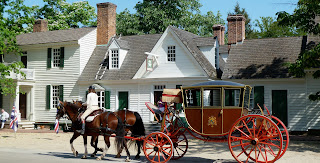 And then there are the taverns. Colonial Williamsburg operates four historic taverns, each with its own character.  Chowning’s Tavern opened in 1766 and served a lower clientele than the other taverns, so today it features hearty sandwiches, Brunswick stew, oysters, clams and chicken pot pie.  Sit in their outdoor beer garden and sip a local Loose Cannon ale, or dine indoors by candlelight and afterwards enjoy “gambols,” colonial games that includes singing, music and games of chance and skill.

At the other end of town is Christiana Campbell’s Tavern, George Washington’s favorite.  He dined here 10 times in a two-month period.  It’s a grand Old World setting, with wooden floors and tables, dining by flickering candlelight with roving balladeers, and a menu of Southern seafood, made from scratch to 18th Century recipes.

An area of modern shops and restaurants called Market Square (made to look old, of course) sits in the middle of DOG Street and offers more conventional dining.  The cheese shop has hundreds of cheeses and wine and drinks and is a good place to stock up.

But the best advice is go when no one else is going.  Go in off or shoulder seasons, be there early in the morning, at twilight or even in the dark (the streets are lit by mini-torches in winter and it’s a great thing to see).  It’s great before Christmas when all the homes are decorated with colonial bunting and wreathes. 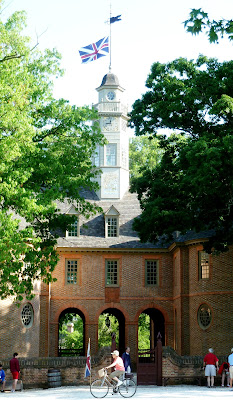 If you go:    For information, www.colonialwilliamsburg.com.   It’s most enjoyable to stay right in the town in one of the hotels operated by Colonial Williamsburg, which can be expensive, or at one of the few cheaper ones that are within walking distance.  There’s free two hour parking in town, but they do ticket. You can park free at the Colonial Williamsburg main entrance, about a half mile walk away.  There’s free buses, but only during tourist hours.    If you arrive late in the afternoon, you don’t need the pass for that day, but for a full day or two visit, definitely purchase the pass for at least one day.  Get the daily schedule – there’s music, political demonstrations, fife and drum and all sorts of activities.  I went to an auction that was quite amusing.