There’s no greater icon for Las Vegas than a statuesque showgirl, sparkling with jewels, her head covered with ostrich plumes, her outstretched arms shimmering with diamond cuffs as she stands motionless and nude, a celebration of the beauty of the female form.

Where once every casino on the Strip had an elaborate showgirl production, today it is all Cirque du Soleil, Broadway musicals, Celine and Donny & Marie. When the Folies Bergere closed in 2008 after a run of 49.5 years, that left Glitter Gulch with just one last showgirl production. Ah, but what a production it is. Jubilee!is pure Vegas – the longest running show in town, and second longest in the world. For 31 years, this $50 million, over-the-top spectacle of 85 dancers wearing 1,000 different costumes has exploded on a stage half the size of an American football field. Literally exploded. Each show uses five pounds of explosives and 1,000 pounds of dry ice.

One of the great ways to enjoy the show is on a backstage tour, held three days a week. Led by one of the showgirls, the tour takes you into their dressing rooms and behind the show’s staggering 75 different curtains and backdrops to see what it takes to put on this swirling sea of color.﻿

Our tour guide, Laura, is a former ballet dancer who has been with Jubilee! for five years. She’s perky, tall and model-thin and joins the tour wearing a g-string, fishnet stockings and a short little sparkling black jacket and bowler hat. While she’s certainly the most glamorous thing in our group of twenty, older, sweating and overweight tourists, we soon learn there is really very little glamour in being a showgirl.

Jubilee! is performed twice a night, six days a week, 52 weeks a year. And there is only one cast with no understudies. That means each dancer must perform every show. When dancers are injured, sick or on vacation, the other cast members must fill in. Laura is a “swing” dancer, so for certain production numbers, she has to know the moves and routines of all the other hoofers so she can fill in for anyone missing. This requires her to memorize 45 different dance routines and costume changes and be able to perform any one of them at the drop of a hat.

Into the Dressing Rooms 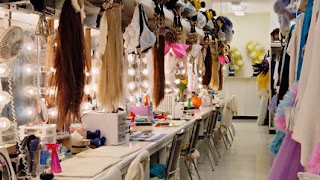 After standing on the main stage to see the immense size of it, the tour group descends two stories below to the cramped dressing rooms. Here we learn that the spectacle you see on stage is dwarfed by the excitement that goes on behind the curtain. Laura has 11 costume changes in the show. Each change requires that she go up and down two flights of stairs in three inch heels, often wearing a 20 pound costume with a headdress that can stick out three-feet on each side, all the while avoiding all the other 85 dancers (and the 75 stage hands pulling curtains and pushing sets). She does 1,500 stairs a night. “There’s no need for the dancers to work out or exercise,” she says. “We get all the exercise we need just being in the show.”

It’s hard to imagine the chaos that goes on in these cramped quarters. Some of the headdresses are so huge that they are held up by pulleys twenty feet in the air and lowered on to the girl’s head just before going on stage. The headdresses alone can weigh 25 pounds and feature hundreds of feathers from ostrich, pheasant, and even vultures – all individually attached to a football-like helmet designed to fit snugly on a showgirl’s head. There are no chinstraps.
It takes balance and incredible strength to hold the headdress up, move gracefully across stage, avoid hitting the other girls, and get back to the dressing room, where you have three minutes to change and do it all over again.

Designed by Bob Mackie and Pete Menafee, the costumes are all different, and many of them are 30 years old. They are valued at up to $50,000 apiece. 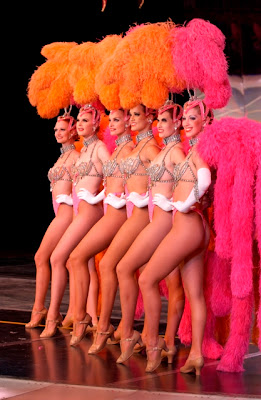 Keeping the costumes in shape requires three costume shops, where a team of specialists are constantly sewing, wiring, and cleaning. As you walk through the shops filled with feathers and sequins, the most memorable thing is that the mirrors are bedecked with personal photos, just like any office desk in the world. “This is where we spend most of our lives, and we’re like a family,” Laura says. Dancers must be 18, but there is no older age limit and the oldest male dancer was 51 and a grandfather. “As long as you look good and feel good wearing a g-string, you’re in,” Laura says.

To stand out on such a huge stage requires real presence. Women dancers must be at least 5 feet 8 inches tall for the “short” end of the line, and 5 feet 10 inches for the “tall” end. The 25 males dancers have to be 6 feet tall.

The History of Nude Dancing in Las Vegas

When Las Vegas introduced showgirls in 1959, the law was that for them to be nude, they could not move. That led to the iconic image of showgirls just standing still. Today, that has loosened up and all of the showgirls are dancers and athletes. Forty of them in Jubilee! are topless; the other covered dancers, of which Laura is one, are called “Bluebells,” after a Miss Blue Bell, one of the early dressers. But it is the nude dancers that steal the show, and consequently they make more money, are the featured dancers, and have the best costumes.
“When I saw the costumes, I knew I had to try them,” Laura says, so she “swings” or fills-in for the nude dancers when required. She holds up a bra that is little more than a ribbon outline of sparking diamonds, the key pieces missing. “It doesn’t look like much, but I’d feel naked without it!” she laughs. 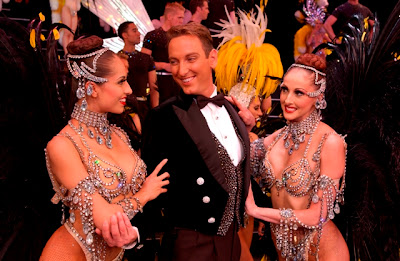 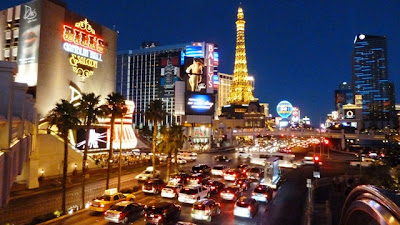 In addition to the dressing rooms, the backstage tour visits some of the elaborate sets that are stored below stage and whisked up by 11 elevators. The show’s set pieces include the sinking of the Titanic, a Samson and Delilah number in which a gigantic temple crashes to the ground, and homage to Hollywood.

Two floors underground, you can see the 30-foot model of the Titanic, or the ship’s enormous boiler rooms, or the huge metal cages, where Laura, as a slave girl, dances in the Samson number. Some 100,000 pounds of sets are moved up and down to the stage in seconds – and all by hand. Whereas modern shows like Phantom of the Opera are computer and machine controlled, the “Old School” Jubilee! production is done by hand with 75 stage hands pulling ropes, shoving props, and placing explosives by hand.

Each girl must do their own makeup – and to be visible on a huge stage, the makeup is heavy. Since their own hair is not part of the show, the girls wrap their heads in a pantyhose cap so they can easily slip into headdresses and wigs. The pantyhose cap may not be the most glamorous look behind the stage, but once they get into their costumes, dance past the curtain, and shimmer into the spotlight – you are seeing some of the hardest working, most athletic, talented and beautiful dancers in the business. 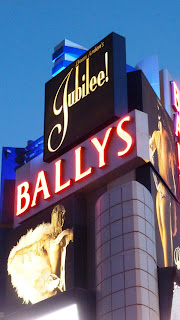 If you go: Jubilee!is a unique and wildly expensive show to produce. When it closes, the world will never see its likes again, so see it soon. The backstage tours are available Monday, Wednesday and Saturday at 11 a.m.; cost is $17 per person ($12 if you also purchase a Jubilee! show ticket). www.ballyslasvegas.com, 702-967-4938.

Las Vegas has the most liberal drinking laws in the world. You can drink anywhere, any time. Buy a beer at a liquor store (there’s more than a dozen on the strip) and you can walk around drinking from the glass bottle, and take your beer into a casino or anywhere you like. The ABC Store (direct from Hawaii) has a good selection of single beers. There are deals along the strip for $1.99 Bud Lights and other cheap beers and for frozen drinks, but to get a craft beer requires a search and will run you $7 to $8. Las Vegas is not cheap anymore. There’s a craft beer booth on the second level of New York casino with 24 beers; the New York casino also has a decent but crowded Irish pub down below.

To walk the main part of the Strip from Luxor to Wynn is about four miles, but it will seem like 20 with the craziness of the people, the lights, noise, non-stop traffic and shows. Still, it’s one of the most fascinating walks in the world. All of the large, free shows that begin at dusk are worth seeing. In order of spectacle they provide, the best are: The Pirate Ship battle at Treasure Island, the volcano at Mirage, the gondolas floating by at Venice (the inside shopping center is worth a look), the plaza at Ceaser’s Palace, and the dancing fountains at Bellagio.

It was 108 degrees the day I was there (in early June), but it was not as frightfully hot as it would seem. There’s plenty of casinos to duck into, there’s usually shade, and it is a dry desert heat. There is a monorail, but it is not located on the strip, so it requires walking the lenght of the casino to find a stop, and the casinos are designed so there is no straight line through them.

A better public transportation is the Deuce bus, which runs up and down the Strip. It’s $5 for a two hour period or better, pay the $7 for a 24-hour pass. The Deuce is a good way to get from the Strip to the Fremont Street Experice, a section of Old Las Vegas that now has zipliners racing overhead, a canapony of several million lights, free bands, and the biggest crowds in town. Fremont Street is too far to walk from the Strip, but worth the journey — at least once — just to experience its craziness. Get on the Deuce, grab a seat on the upper deck (the bus is air conditioned, new and very cool), and it’s a great (but slow) ride up the Strip to Fremont Street.

Where to stay: The new “showgirl” of the Las Vegas Strip is Aria Resort & Casino, a 4,000-room, AAA Five Diamond beauty that opened in 2009. It’s fun to see an “Old School” show like Jubilee!, but you want to stay in the 21st Century – and this place is it. All of the guestrooms feature floor-to-ceiling windows and the most technological advanced rooms in Las Vegas. One “Good Night” turns off the lights, shuts the curtains, and turns on the privacy notification. The lobby and public areas mix water, wood and stone, including a relaxing 270-foot long waterfall as you enter. The curvilinear steel and glass towers were designed by Pelli Clarke Pelli (architects of some of the most monumental buildings in the world including the Petronas Towers in Kuala Lumpur, Canary Wharf Tower in London and New York’s World Financial Center). This resort — and the attached Crystals shopping center and three outdoor pools – are a whole new contemporary look for Las Vegas, but in keeping with the same elegant shapes and classic beauty of the city’s famous showgirls. www.arialasvegas.com